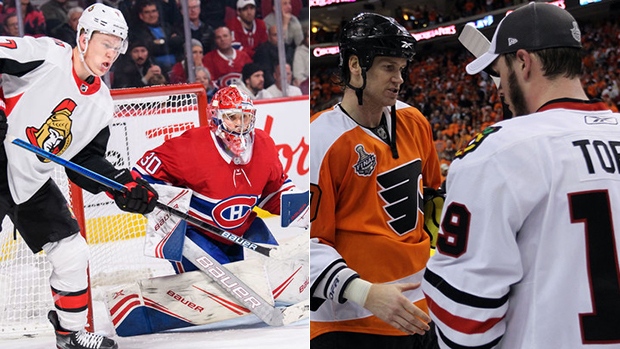 Welcome back to the Friday Five, where we’re pointing out quirks, quips and questions that pop up throughout each week of the NHL season.

Chris Pronger had a nice chuckle when he saw Ottawa Senators pest Brady Tkachuk scoop up the game puck seconds after Cayden Primeau picked up his first NHL win on Wednesday night for the Montreal Canadiens.

Tkachuk told reporters that he was simply grabbing the puck to give to a young fan.

“Hey, maybe Brady's just trying to be a good NHL player cultivating fans in the community,” Pronger said with his usual dose of sarcasm on Friday. “It’s nice to see there’s some passion is still in the game, that there are players still trying to get under the opposition’s skin in the NHL.”

Primeau said Friday that Tkachuk messaged him before the game and told him that he was going to take the puck.

“Nothing can surprise you with Brady,” Primeau told reporters. “When people don’t like him that’s what he’s supposed to do.”

Tkachuk may have learned from one of the best in Pronger, a fellow St. Louisan.

It’s coming up on a decade since Pronger, then with the Flyers, infamously rankled the Chicago Blackhawks during the 2010 Stanley Cup Final when he stole the pucks after Games 1 and 2 at United Center. Pronger said the sinister idea popped into his head after reading Blackhawks coverage in the newspaper.

“The media picks up on certain things and I knew that Chicago was into keeping pucks on the wall in their dressing room,” Pronger said. “I was trying to piss ‘em off. I think it worked. We’re still talking about it!”

A Chicago restaurant, Harry Caray’s, publicly offered $50,000 for the puck’s safe return. The side benefit to Pronger’s puck theft was that once Ben Eager went after him at the end of Game 2, that was all anyone wanted to ask about, not that the Flyers lost both games to open the series.

His Flyers ended up one overtime goal away from a Game 7.

So where is the Game 2 puck now?

“It’s a paperweight,” Pronger said, laughing. “I have it sitting in my office somewhere here at home. Whenever we have people over, I like to show it off every now and again.”

Oh boy! I was just cleaning up my desk last night and came across this old treasure. Yes that is a cellophane bag behind the puck. Just trying to preserve it for future generations to come. - Best caption wins a signed puck! ... sorry all just not this one 😬 This one’s a keeper!! #thepuck

The hockey world is breathing a sigh of relief with Niagara IceDogs goaltender Tucker Tynan in recovery following a severe skate laceration in an Ontario Hockey League game on Thursday night.

Tynan, a 17-year-old from Chicago, was on the receiving end of an inadvertent, skates-first collision with a London Knights forward driving the net. He lost a significant amount of blood before team trainers were able to temporarily halt the bleeding.

Tynan underwent surgery at Niagara Health System in St. Catharines, Ont., according to the IceDogs, and is listed in stable condition. The IceDogs postponed the remainder of Thursday's game, plus both games this weekend as "the team continues to recover from unfortunate events on Thursday."

The collision was a total accident, but is there any way to better protect goaltenders from skate cuts in the future?

“That is the first thing I thought of, with my 15-year-old son who is also a goaltender,” said former NHL goalie Martin Biron, who is an analyst across the border from Niagara with the Sabres. “In this case, I think Tucker was really lucky that there was so much help around him at an OHL game with trainers and an ambulance and medical professionals.”

Both Biron and resident TSN goalie guru Jamie McLennan referred to Tynan’s injury as a “freak thing,” not unlike the gruesome skate cut to Clint Malarchuk’s throat in 1989.

After Malarchuk’s injury, throat protection became more common for goaltenders, with both the dangling plastic shield that Biron wore and Kevlar-reinforced collars.

In Tynan’s case, the skate blade appeared to catch him just between the top of his pad and the bottom of his hockey pants.

“Goalies are already wearing knee pads under their leg pads, so it had to even be above that, which we’re talking is a really small area,” McLennan said. “It’s difficult to think how small of an area that is to hit. You probably couldn’t do it again if you tried.”

McLennan said he was never cut by a skate in his 18 years of pro hockey. Biron wore hockey socks that were Kevlar-reinforced in the calf area to make them cut-proof.

“It’s really scary,” Biron said. “The only thing I can think to do would be to find the technology to produce cut-proof undergarments [leggings] to wear underneath your equipment. I think we’re always trying to make sure everyone is well protected, from youth hockey all the way up to the NHL.”

Tonight's performance by @j_markstrom has us thinking about another goaltender in need of support from the hockey world.

3. NHL scoring is tapering off

There were two scoreless games in the NHL through regulation on Thursday night, the first time that’s happened on the same day in the salary cap era. The last time it happened was on Oct. 15, 2003, when the Thrashers/Rangers and Flyers/Sharks both ended in scoreless ties.

(Remember when ties were a thing? Most of today’s NHL players didn’t grow up watching them.)

Two scoreless games through three periods helped contribute to a dip in scoring recent weeks. This season started at a record 6.2 goals per game, right up there with that first penalty-filled season out of the lockout in 2005-06. In the last 253 games played since Nov. 7 – almost exactly half of all games played this season – there have been an average of 5.74 goals per game.

This most recent stretch of 5.74 goals per game is right about the average for each of the last 10 seasons, as illustrated by HockeyViz.com’s Micah Blake McCurdy.

Is Jack Eichel the NHL’s most valuable player … or simply the most improved player? The answer is Eichel might be both.

If the season ended today, Eichel would certainly be on this voter’s Hart Trophy ballot. Eichel, 23, has 22 goals and 24 assists for 46 points in 33 games. He’s second league-wide in goals to David Pastrnak and sixth in points.

Eichel is just six goals away from his career-high of 28, set last season in 77 games. He is riding a 15-game point streak for the Buffalo Sabres, who sit in second place in the Atlantic.

It’s a campaign that is reminiscent of Taylor Hall’s Hart bid in New Jersey in 2017-18, when he compiled a 25-game point streak and helped the Devils sneak into the postseason. Hall finished 41 points clear of his next closest teammate; Eichel already has 17 more points than the guy (Victor Olofsson) he’s fed for six goals with the primary assist.

“The biggest difference I’ve seen with Jack is in his shot quality,” said Biron, who has seen every Sabres game this season. “It used to be that he would come into the zone and look to see who was behind him, coming with him to make a play. Now he’s going for it, he’s taking it to the net, and it’s leading to better opportunities for both him and his linemates.”

Coaching in the NHL is generally a two or three-year walk on a tight rope. Never more has that feeling been amplified than the last three weeks, with five coaching changes since Mike Babcock was axed by the Maple Leafs on Nov. 20 – including two for inappropriate or unprofessional conduct (Bill Peters and Jim Montgomery). All five coaching changes were made during a span in which Jeff Blashill’s Detroit Red Wings didn’t win a single game.

There were seven in-season coaching changes last year, which tied an NHL record. Every franchise in the NHL has turned over its coach at least twice in the salary cap era, except for Nashville and Detroit.

We might not be done this season. There has been speculation on the job status of Jon Cooper, Peter Laviolette and Blashill this season, all of whom appear to be safe for now.

That’s left us with some incredible stats on job status, including this one: Carolina’s Rod Brind’Amour is now the 14th longest-tenured coach in the NHL. He’s been on the job 19 months, four days longer than Montgomery lasted in Dallas.