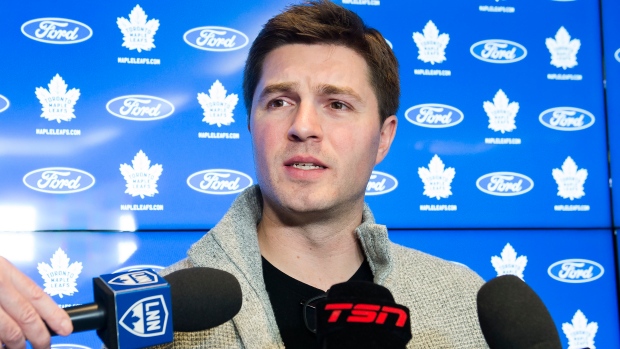 It’s time for another edition of the Friday Five, where we point out quirks and quips and raise questions that pop up throughout the week in the NHL season.

1. Could the Leafs use the Patrick Kane Loophole?

Toronto GM Kyle Dubas was able to keep his powder dry for TradeCentre while trying to fix the Leafs’ backup goaltending woes. The trade for Jack Campbell and Kyle Clifford was dollars-in, dollars-out on the salary cap and he hung onto all of his major trade chips in forwards Andreas Johnsson, Kasperi Kapanen and Alex Kerfoot.

But Dubas may have even more flexibility than previously imagined.

The Maple Leafs GM’s comments about the injury timeline of defenceman Morgan Rielly on Thursday raised speculation that Toronto might be able to steal a page from the Chicago Blackhawks’ playbook.

Rielly fractured his foot on Jan. 13 and was initially projected to be out for eight weeks.

“We’ll get more updates on him in the coming weeks in terms of how long he’ll be out,” Dubas told reporters. “That’ll dictate how much cap space we have going into the deadline in terms of whether we’ll have his full amount of room with regards to LTI for the rest of the season.”

Translation: Dubas hinted at the possibility Rielly may miss the remainder of the regular season.

That’s significant because if Rielly, Cody Ceci and Ilya Mikheyev are all out for the rest of the regular season, the Leafs would be able to absorb a full $9 million salary cap hit before the Feb. 24 trade deadline without having to move out any other salary.

All three of those players, plus any new acquisition(s), could then return for the Stanley Cup playoffs without any cap consequences because there is no salary cap in the playoffs. Even knowing just one of those players will be out through the regular season would be a huge boost.

It’s a cap loophole or workaround that’s only been used once. Patrick Kane was injured on Feb. 24, 2015 and returned for the opening night of the playoffs on April 15. The Hawks used his long-term injury space to exceed the cap and acquire Kimmo Timonen ($2 million) and Antoine Vermette ($3.75 million). They all helped Chicago win the Stanley Cup with a payroll that wouldn’t have been cap-compliant in the regular season.

Does that break any rules? No, but there’s no doubt that rivals would argue it’s not within the spirit of the Collective Bargaining Agreement. Teams are already unhappy with the Leafs creatively bending the spirit of the LTIR accommodation by acquiring David Clarkson’s dead-weight contract, on top of Nathan Horton’s, to create more space. The Leafs are spending $95 million in real salary this season on an $81.5 million cap, $10 million more than any other team.

The risk with Rielly and Ceci remaining on the shelf until April, of course, is that the Leafs fail to make the playoffs entirely.

We know that the Edmonton Oilers are in the market for a third-line centre. The Philadelphia Flyers, the Winnipeg Jets (depending on Adam Lowry’s injury status) and maybe the Washington Capitals are also looking for centre depth.

Outside of Ottawa’s Jean-Gabriel Pageau, who was No. 4 on the latest TSN Trade Bait board, the next centre available is an expensive Kyle Turris, way down at No. 26.

So who else might be available? Let’s take a look Beyond the Board:

With Carolina occupying the Eastern Conference’s final wild-card spot on Friday morning, it might take a record number of points to make the Stanley Cup playoffs in the East this year.

That’s up from last year’s record of 97 points, and the average of 95 points it took to get in over the past six seasons, since the NHL went to the wild-card standings format. It’s way up from the 91-point pace currently set in the West by the Nashville Predators, which is right around the West average (90) from the past six years.

That leaves us with two thoughts: A) Has the torrid pace in the East caused some teams that might otherwise be closer to the hunt, like Montreal, to become sellers earlier? The Habs are on pace for 86 points.

And B) It really is easier to make the playoffs in the West. That was the gripe from the NHLPA when the new format was agreed upon in 2013, with 16 teams in the East and one or two fewer in the West (before Vegas joined). Last year, the bar was 10 points lower in the West. Fewer points have been required in the West every year since the format was changed. The last time you need more points in the West than the East was 2011-12, when the conferences were balanced, with Winnipeg temporarily playing in the Southeast division.

All eyes have been focused on Alex Ovechkin’s chase on Wayne Gretzky’s record 894 goals. But as Ovechkin nears No. 700, there is another lesser-known NHL record within his grasp this season.

That would be the record nine empty-net goals that Pavel Bure scored with the Florida Panthers in 1999-00. Ovechkin has six this season with 27 games to play.

Gretzky holds the career record with 56 empty-net goals, 16 more than second-place Marian Hossa (40) and third-place Ovechkin (39). But Gretzky never had more than six in a year; only four players have ever done that – one being Michael Grabner, who has the most empty-net goals (seven in 2017-18) scored in one season in the salary cap era.

You never know, Ovechkin’s empty-net strikes may well be the x-factor in this year’s three-headed Rocket Richard race. Just one of David Pastrnak’s 38 goals came with the cage empty; Auston Matthews has two on 39 goals, but those two came in the past eight games. Matthews had just one empty-netter in the first 258 games of his career.

Some observers rag on empty-net goals, but you have to be trusted to be on the ice late in tight games to score them.

Back in November, when Haley Wickenheiser was inducted into the Hockey Hall of Fame, we raised the idea on the Friday Five of Hockey Canada retiring her No. 22 from the women’s program.

Hockey Canada CEO Tom Renney said then that the idea was “certainly worthy of discussion.”

An update of sorts: Renney said Thursday that discussion will indeed occur at Hockey Canada’s next board meeting in April.

Wickenheiser is deserving of that one final honour as Canada’s all-time leader in games played (276), goals (168), assists (211) and points (379). Her number hasn’t been available to a women’s national team player, but it should not be worn again.