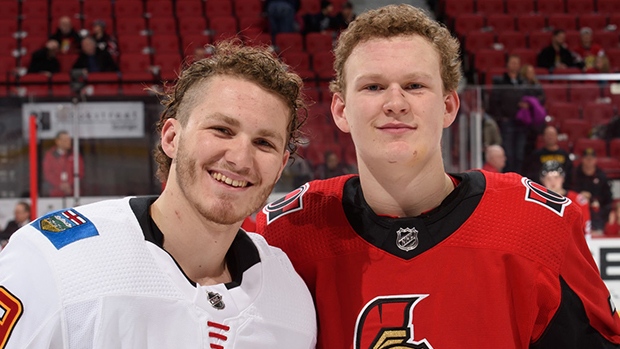 Frank Seravalli’s All-Star edition of the Friday Five looks at quirks, quips and questions from around the NHL heading into All-Star Weekend, including the first All-Star Game appearance for Matthew and Brady Tkachuk, who spent many days of their youth at Enterprise Center in St. Louis watching their dad Keith play for the Blues.

ST. LOUIS — We’ve got an All-Star edition of the Friday Five, so let’s take a look at quirks, quips and questions from around the NHL.

There is an infamous Tkachuk Family story that longtime security guards at Enterprise Center still like to tell. It involves young Matthew and Brady wrestling in the Wives’ Room after their old man, Keith, helped the Blues to a win.

“I guess I hit him and he hit his forehead on the couch,” Matthew recalled Thursday. “My dad came out before we were leaving and he goes ‘Come with me.’ He brought Brady back into the dressing room and then [trainer] Ray Barile stitched him up.

“Yeah, that’s a legendary story I guess that nobody’s going to forget. I’d like to forget it, but everyone always brings it up.”

The first All-Star Game appearance for Matthew and Brady Tkachuk was always going to be special. Not that long ago, they were those kids you saw on TV tagging along with their dad at the 2004 and 2009 All-Star Games in Minnesota and Montreal. 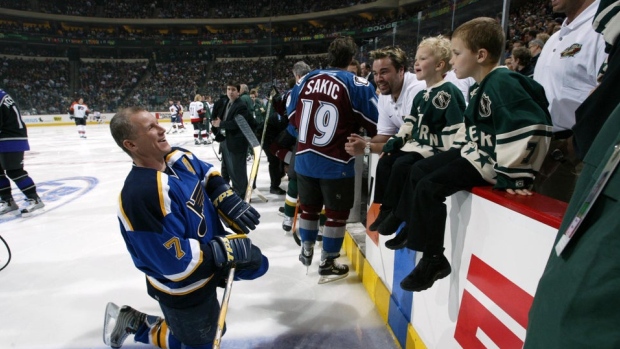 It was their mom Chantal’s idea to get photos with every player they met. The likes of Patrick Kane and Alex Ovechkin and others – some of whom they’ll square off this weekend – all signed their jerseys, which hung in both of their bedrooms.

But to play in their first All-Star Game together? In St. Louis?

You can’t make that up.

Brady and Matthew will face each other in the Shooting Stars event at the Skills Competition on Friday night, where players will shoot pucks at targets from the stands.

“We’ve probably scored 2,000 goals in that building as kids,” Matthew said. “We were here all the time, running around the locker room, probably torturing the trainers.”

There are some players who are jaded by the All-Star festivities – and some who have chosen to rest on a beach and not show up. Brady was planning to be in St. Louis anyway to support Matthew, so it wasn’t difficult for him to book an earlier flight home from the Bahamas when he got the last minute call to replace Auston Matthews.

“It’s pretty unreal that we’re here,” Brady said. “Honestly, I don’t think we ever talked about this. It’s just crazy how it’s worked out. I’m just so happy to be here.”

2. All eyes on the Alberta Beef

Leon Draisaitl said two weeks ago he would “get off the ice” if placed on the same trio with Matthew Tkachuk in Saturday’s All-Star Game. But Matthew downplayed on Thursday the idea that any vitriol from an old school Battle of Alberta inferno might boil over into All-Star.

“This isn’t an event to talk about stuff like that,” Matthew said. “This is an event where the best players in the sport are coming here and playing on the same team and going out and having some fun, putting on a show for the fans. So I’m looking forward to doing that and being around the locker room with all of these guys.

“Those guys [Draisaitl and Connor McDavid] in particular are some of the best in the NHL, so to share a room with them and be on the same ice as them, it’s going to be awesome.”

But that doesn’t mean that other players won’t be watching to see what interactions between the Oilers’ stars and Tkachuk, Mark Giordano and David Rittich will be like.

“I’d be lying if I said I wasn’t curious,” Canucks rookie Quinn Hughes said. “But at the same time, that’s not my business, and I’ll let that play out the way it wants to play out. I’m here to have fun and enjoy everyone’s company, so I’m not going to get into the middle of that.”

Tyler Seguin will be watching from across the locker room, but he doesn’t expect any gasoline to be poured onto the fire ahead of Wednesday’s rematch in the Battle of Alberta, when Zack Kassian comes back from his two-game suspension.

“We’re all professionals,” Seguin said. “There’s not going to be any drama unfortunately for your guys’ Twitter. But I’m a hockey fan. It’s funny what’s going on there. I’m entertained. More drama, more anything, it’s good for the game.”

3. Tocchet phoned to get Gallant’s blessing

As for Pacific Division coach Rick Tocchet, the Coyotes’ bench boss said he’s simply going to “stay out of it” when it comes to any potential Alberta beef.

Tocchet wasn’t expecting to replace Gerard Gallant, who was fired by Vegas on Jan. 15 after leading the Golden Knights to the best record in the division through Jan. 2. He said he phoned Gallant to get his “blessing” to step in.

“I feel kind of bad about it,” Tocchet said. “But I’m here to represent the Coyotes, and with [goalie Darcy] Kuemper getting hurt, somebody should represent us, so that’s kind of nice.”

This is Tocchet’s third season in Arizona, making him now the 11th longest-tenured coach in the league. He said he doesn’t think about job security often, but the Gallant change gave him pause.

“When a guy like Gallant goes down, it makes you think sometimes,” Tocchet said. “The partnership between a GM and owner is huge. Because sometimes things aren’t in your control. As a coach, you can’t worry about that stuff. I try to keep my eye on the prize.”

Tocchet said the conversation with Gallant was “great.”

“He made me feel real comfortable, he’s just an awesome guy,” Tocchet said. “I just told him he’s not going to be out of work for very long.”

This is Patrick Kane’s ninth All-Star appearance. He’s played as many games as anyone in the NHL over the last decade with three Stanley Cup runs. So as other top stars have bailed out for rest, why hasn’t he?

“I think it’s important first and foremost to represent the NHL and the Blackhawks,” Kane said. “Another thing is you don’t want to take the rest and miss [be suspended for] a game. You want to play as many games as you can. And for me, I’m going to have four days off after this [for the bye week].”

The NHL has an attendance problem at All-Star. Ovechkin, Marc-Andre Fleury and Tuukka Rask all abstained for rest. Sidney Crosby has played in just two All-Star Games. The NHL doesn’t get the buy-in that the NBA does, where the All-Star Game matters.

So, how does the NHL fix it? They can either institute a stiffer penalty for absence, or maybe issue a waiver for long-standing veterans who have fulfilled their duty for a specific number of years.

If presented the opportunity to skip, Kane says he doesn’t think he would.

“It’s one of those things that you’ll probably enjoy a little more after you’re done playing, saying you went to whatever number it was,” Kane said. “It’s pretty rare to see guys selected every year to come to the All-Star Game. They’ve been creating memories for me throughout my career. Every different All-Star Game has a different memory, so it’s fun to look back on them.”

5. Should goalies get consideration for the Lady Byng?

No goaltender has ever won the Lady Byng Trophy in the 96-year history of the award. It’s usually given to the forward who “exhibits the best type of sportsmanship and gentlemanly conduct with a high standard of playing ability.”

Only one defenceman has taken home the Byng since 1954. But one goaltender, Fleury, received a vote for the Lady Byng in this year’s PHWA Midseason Awards.

Should goaltenders get more consideration? Blues netminder Jordan Binnington says he would be in favour.

“Include the ‘tenders,” Binnington said. “We don’t usually take that many penalties.”

Binnington has two minor penalties this season. That’s half as many as Byng Midseason winner Nathan MacKinnon has been whistled for in Colorado.

“Yeah, I don’t think I’m going to be winning that award,” Binnington said. “But we play hard. We’ve got to take a lot of stuff as a goalie and you’ve got to stay composed and be disciplined to give your team the best chance to win. I think that’s good to be included.”

A better first step might be getting more defencemen in the mix.

“I think everyone should be open for that award,” Binnington said. “Defencemen especially, because that’s probably where you get the most penalties.”