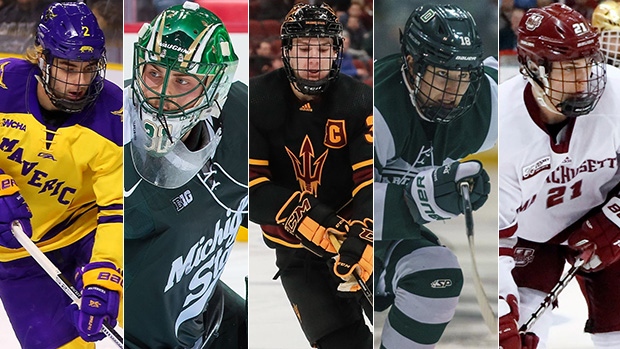 It’s a Mail-it-in March edition of the Friday Five. March means all eyes in NHL scouting circles have turned toward college hockey, where each team is attempting to mine a diamond from the rough. This is their annual shot at “free players,” potential prospects who won’t cost a draft pick because they’ve already been passed over in the draft for one reason or another.

This season’s crop might not be as deep as past years, but there has still been no shortage of interest in the high-end free agents.

Exactly 28 of the NHL’s 31 teams have expressed interest in Mackey since he set foot on Mankato’s campus. He was highly sought after last season but returned for his junior campaign and set some ground rules: no contact from NHL teams after Christmas so he could focus completely on the season. Seven NHL teams personally met with Mackey before Christmas, two others have joined the fray since, and all nine are willing to offer Mackey a chance to immediately step into the NHL this season and burn the first year off his entry-level contract. Mackey, 23, has NHL bloodlines - his father, David, played 126 games - and he’s expected to set a new college career high in points as a big blueliner who can skate.

Lethemon would probably scoff at the notion that he is a “late bloomer.” The 6-foot-2 netminder has started nearly half of the Spartans’ games each of his four seasons in East Lansing. There were NHL teams – including the Winnipeg Jets – that had interest in spending a late-round pick on Lethemon back when he was draft eligible. Plus, goaltenders routinely take the longest to develop. But it’s this season – with his consistency and the third-best save percentage in the country – that has really caught the eye of NHL teams. He cemented his status as the premiere free agent goalie when he outduelled the other candidate, Penn State’s Peyton Jones, in a 48-save shutout in Happy Valley in November. There are six or seven clubs with serious interest. For Lethemon, it will all be about the best fit as opposed to just upfront dollars because he has his eyes set on a long and fruitful pro career - a mirror of his time at Michigan State.

The waiting has been the hardest part for Pasichnuk. Since the Sun Devils are an independent, they don’t have a conference tournament and automatic bid. The team has been sitting around since Feb. 22 waiting to find out whether their season will continue in the NCAA tournament. Pasichnuk is an undersized, but thickly built offensive genius who is third among all defenceman in the nation in scoring this year. The co-captain and power play quarterback, seemingly on the ice half the game with fellow undrafted free agent Josh Maniscalco, is very likely to step into the NHL this season. After 20 teams displayed varied interest, the Bonnyville, Alta., native is believed to be down to three suitors. All three are willing to have him burn the year on his entry-level deal this season. Now the hope is that the wait, almost like an NHL training camp for Pasichnuk, will not cost him some meaningful pro games.

The ECAC’s Co-Player of the Year has sprouted into a can’t-miss find. O’Connor was just 5-foot-8 at age 18, a big reason he wasn’t on NHL radars in his draft year, but has grown to 6-foot-3 while playing for the appropriately named for the Big Green. NHL teams have flocked to watch O’Connor, who they see as a legitimate NHL power forward prospect with a nose for the net. His 38 goals (in 68 games) are the third most in the country over the last two seasons – with a 16 per cent shooting percentage this season – but his overall game has grown as much as his body. There is definitely no shortage of NHL interest in O’Connor, but there is no guarantee the sophomore will decide to leave school early.

If Cale Makar was UMass’ engine on their Frozen Four run last year, Chaffee was one of the key cogs offensively. He took home the Herb Gallagher Award as best forward as voted by the New England College Hockey Writers, won the Hockey East scoring title, and was named a first-team All-American. Those accolades don’t come by accident, even if they didn’t bring quite as much name recognition. This season, Chaffee’s total point production has dipped a bit with the departure of some significant talent from the team, but he’s on track to set a new career high in goals. Scouts see Chaffee as a talented skater whose game has matured, and one who could well find his way to the NHL. The Michigan native and two-time Hockey East All-Academic team player will have plenty of options available if he decides to depart Amherst after three years.