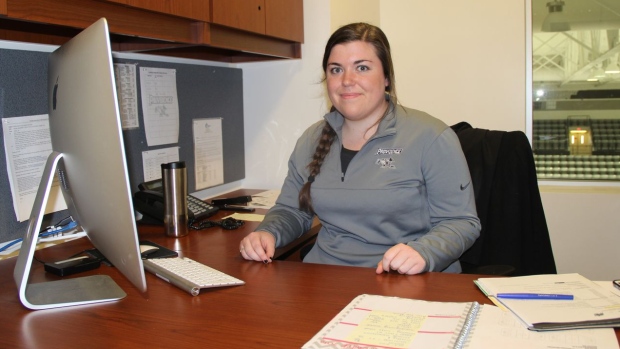 Leaman wanted Theresa Feaster, who serves as his director of hockey operations at Providence College, by his side in Edmonton as video coach.

“It was a no-brainer,” Leaman said Tuesday, while quarantining in Edmonton. “We needed her. Being male or female didn’t have anything to do with it. It was entirely based on her being overqualified for this job, her making us better, her making our country better.”

Feaster said she was “over the moon” when Leaman asked her to join the team in a tournament that she described as the “gold standard” in hockey. It may just be a stepping stone in a blossoming career that Feaster hopes one day leads her to become the NHL’s first female general manager.

“I want to be an NHL GM someday,” Feaster said. “I want to win a Stanley Cup. I think that’s every little kid’s dream. Mine isn’t any different.”​

You could say that the 28-year-old Feaster, the oldest child of Stanley Cup-winning GM Jay and his wife, Anne, was born to work in hockey.

But that would be selling her path to the world’s stage short, because Feaster is a dyed-in-the-wool hockey grinder, and has been since she was a little girl.

Jay first recognized his daughter’s passion for the game when he took her on an AHL road trip with the Hershey Bears to Adirondack when she was five or six years old.

“We got absolutely smoked in Glens Falls, and she was little, but we got on the bus for the long ride home and I looked at her and said, ‘Don’t you say a word to anyone,’ ” Jay said Monday from his home in Florida. “She had awareness then, the significance of a loss. It wasn’t until [coach] Bob Hartley turned to her and said, ‘Now Theresa, what did you think of that mess?’ that she spoke.”

Jay said Theresa was “never just a typical hockey fan.” The former Flames and Lightning GM fondly recalls Theresa hanging out in his home office as a helper, always interested in helping fax a player contract or other important hockey documents.

“I would come home from the rink in Hershey on a Saturday night and instead of watching a movie, we would sit on the couch together and watch the NHL Center Ice package,” Jay said.

Jay helped introduce Theresa to Leaman at the 2012 NHL Draft, while she was enrolled at Providence as a student. She became a student volunteer during her junior year and two things immediately stood out to Leaman.

“One night after a Friday night game we were in there late breaking down tape, usually until midnight or one o’clock in the morning getting ready for Saturday’s game,” Leaman said. “I told her to take off, go have fun, it’s a Friday night, and we know those are big for a college student. She said to me, ‘No, I want to stay. I want to watch.’ That was big.

“Then later that year, we lost a game. It was a tough loss. I asked her what she thought, and she let loose on a player real good and I thought ‘Wow, she really has a feel and eye for the game.’ Just because you’ve been around the game for your entire life doesn’t mean you know how to win.”

After helping Providence to a national championship in 2015, Leaman kept Feaster on as a graduate assistant for two seasons before offering her a full-time position in 2016. Feaster remains one of only two women working full-time as a NCAA Division I men’s hockey staff member. Brittany Miller held the same director of hockey operations title at Boston University and has since moved on, while Kelsey Harbison currently works in the same role at Denver University.

Feaster wears many hats as the Friars’ director of hockey operations. She manages team services, arranging flights, buses, hotels and meals. She takes care of day-to-day needs, doing what she can to take items off the plates of players and coaches.

But her real passion is in the video room.

“I love the video. That is the best part of the job,” Feaster said. “Whether it’s live-tagging [game events as they happen] or pre-scout, I love diving in, watching games and getting lost in the video.”

That, Leaman said, is where Feaster shines.

“She is a step ahead of me,” Leaman said. “She knows exactly what I’m looking for. She knows exactly how to break an opponent down. You watch enough games and anyone can break down a forecheck, or a power play, or neutral zone play. But with Theresa, it’s not just arbitrary clips, she knows how to pinpoint what makes an opponent win, and that’s the difference.”

The question now is: How far will Feaster go? She said she is “thrilled to be doing what I’m doing,” and wants to win another national championship at Providence. But she also has her sights set on the NHL.

“The change has been dramatic over the last few years,” Jay said. “I’m hoping that it’s within the next 10 years that we see women populating the ranks, where it won’t be as uncommon as it is right now. It’s going to take a visionary owner who doesn’t want to limit the search field – by colour, gender, whatever doesn’t matter, that it's only [about] the most qualified and best talent.”

Feaster credited her father for not just instilling in her the passion for hockey, but for opening her eyes to the possibility of joining the family business and carving out her own life in the game.

“I owe so much to my dad. He recognized at such a young age that this was my passion,” Feaster said. “He brought me into his world, gave me the experience to be a fly on the wall around John Tortorella and Bob Hartley, and the confidence that I could do this.”

Feaster says she hasn’t achieved success at Providence and joined Team USA at the World Juniors because of her last name.

“I’m proud of her for the way she’s gone about it,” Jay said. “She didn’t get a foot in the door; she has kicked it open.”

That leaves people like Leaman pondering the question: Why not her? Why can’t Feaster be the one to continue kicking doors open at the NHL level?

“People are figuring out how good she is,” Leaman said. “She’ll definitely be opening eyes. Anyone who spends time around her would be a fool not to recognize her talent. Theresa is a lot of the brains behind the operation. My only trepidation in bringing her wasn’t because she is a woman, really my trepidation was leaving Providence in a hole while she’s here.”