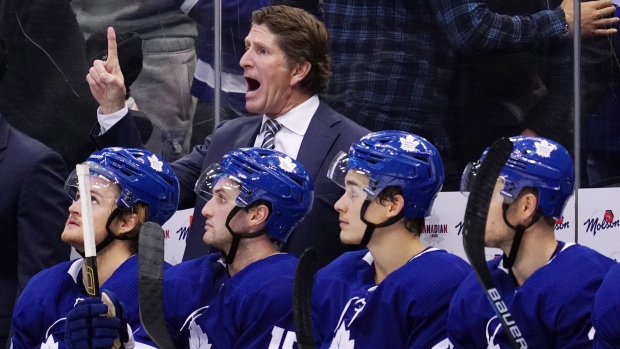 Subscribe and listen to the full podcast here: rayanddregs.com / tsn.ca/rayanddregs

From this week's edition:

Toronto Maple Leafs head coach Mike Babcock on expectations and where the team is at right now:

"When we changed our lineup as much as we did we knew it wasn't going to be Day 1...you plan every day to be successful - that's just what you plan for - and when it's not as good as you want you have to work towards it and you gotta keep trying getting better. I think that's the mode we've been in. When you come into the year, you want to get out of the first 20 (games) with an identity. And it's not last year's identity because that doesn't happen. It's reinventing yourself so you know what you are. You say to the players, let's do what we do and they know what that is...so I would say after 14 games, we don't know what that is yet..."

Former NHLer Jeff Odgers, who played with Ray (in the NHL) and Darren (as kids in Saskatchewan):

Ray: "We hooked up in Atlanta. We only won 14 games the first year and you came in the second year, so you CLEARLY were the big addition..."

Jeff: "(Laughing hard) And that's why the Atlanta Thrashers are now in Winnipeg..."

Throat Punches from Ray and Darren:

"Someone actually posted a picture (on a fan site) of Dustin Byfuglien's house with the address posted in the picture - an enormous invasion of privacy..."

"They deserve a throat punch...what is gained by that? What's the thought by it?"

Listen to the full podcast here:

Toronto's head coach Mike Babcock joins the guys and talks about where the Leafs are at with developing their team identity and they chat about how he almost became Ray's teammate. Ray and Darren also catch up with their old teammate Jeff Odgers, and Jeff dishes some hilarious stories from his and Ray's playing days on the Atlanta Thrashers.