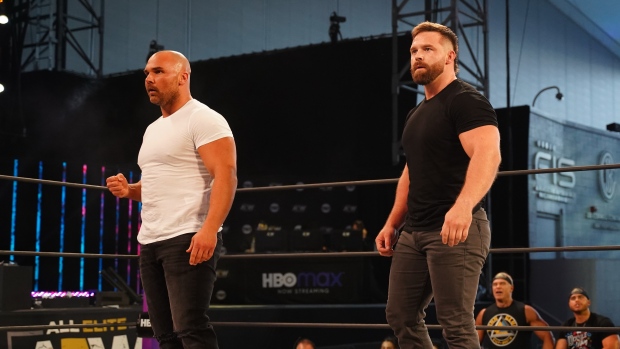 Cash Wheeler and Dax Harwood - FTR - make their highly anticipated in-ring debuts on Wednesday's all-new edition of AEW Dynamite when they take on The Butcher and The Blade.

You can catch an all-new AEW Dynamite at 8pm et/5pm pt on TSN1, TSN2, the TSN app, streaming on TSN Direct and on TSN.ca.

The Top Guys made their presence known in All Elite Wrestling on the May 26 edition of Dynamite, seemingly coming to the aid of The Young Bucks, who had been jumped by The Butcher and The Blade. But after taking out The Blade with a spike piledriver and leveling The Butcher with the Shatter Machine, FTR made it very clear that it wasn't a goodwill offering to the Jacksons, blowing them off when they went for a handshake.

In last week's sit-down with Tony Schiavone, FTR made it very clear that they were coming for the AEW Tag Team Championship and they would deal with any team in their way. Will The Butcher and The Blade get their revenge or will they be the first in a line of teams that Wheeler and Harwood leave in their wake?

When Cody won the TNT Championship he said he was going to be a fighting champion and his series of weekly title defences continues on Dynamite when he takes on one half of Private Party, Marq Quen. After defeating Jungle Boy last week, can Cody make it 2-0 as champion or will Quen prove he's more than just a tag-team specialist?

AEW Women's World Champion Hikaru Shida returns to the ring on Wednesday night as she teams up with "The Galaxy's Greatest Alien" Kris Statlander to take on the team of former champion "The Native Beast" Nyla Rose and "The Bad Girl" Penelope Ford. With a number of her so-called conspirators in this match, will Dr. Britt Baker make an appearance on Dynamite?

A week after falling victim to "Le Champion" Chris Jericho's Judas Effect, Colt Cabana has another shot at the Inner Circle when he faces off with "The Spanish God" Sammy Guevara. Cabana will have to do his best to keep his focus on Guevara in the ring. Not only will he likely have to contend with other members of the Inner Circle at ringside, there remains the looming spectre of Mr. Brodie Lee and his offer for Cabana to join The Dark Order.

With Guevara in action, the rest of the Inner Circle will also be busy on Wednesday night. Jericho returns to the broadcast booth on Dynamite to provide the kind of commentary that only he can, while Jake Hager, Santana and Ortiz will be in six-man action when they take on the No. 1 contenders for the Tag Team Championship, Best Friends (Trent? and Chuck Taylor) and Orange Cassidy. After getting under his skin now for two straight weeks, Cassidy seems to find himself on a collision course with Jericho. Will that situation boil over on Dynamite?