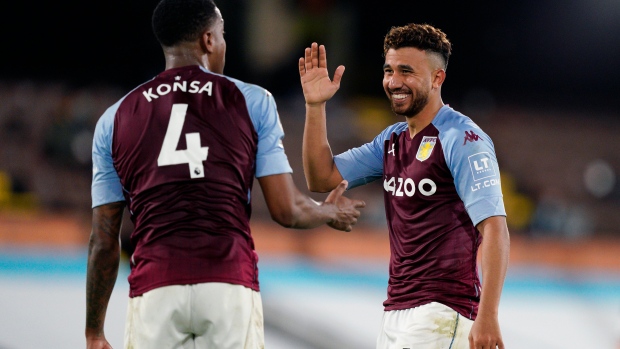 LONDON — Fulham maintained its unwanted record of conceding at least three goals in each game since the team’s return to the English Premier League by losing to Aston Villa 3-0 on Monday.

It is now 10 goals conceded and three defeats in three games for the promoted southwest London club after midfielders Jack Grealish and Conor Hourihane scored in the first half at Craven Cottage and defender Tyrone Mings added on soon after the break.

All the goals came from dreadful defending by Fulham, which conceded a league-high 81 goals the last time the team was in the top division, in 2018-19.

There looks to be no difference two seasons on.

Villa, on the other hand, has yet to let in a goal in this campaign having opened with a 1-0 win over Sheffield United.

Fulham manager Scott Parker switched to a five-man defence in an attempt to stem the tide of goals conceded after losing to Arsenal 3-0 and to Leeds 4-3 over the first two rounds.

Yet Grealish was allowed to race through and latch onto a ball over the top by John McGinn, before the Villa captain directed his low shot past goalkeeper Alphonse Areola after just four minutes.

Ollie Watkins, Grealish and McGinn combined to set up Hourihane to slot into the corner from 10 yards (meters) out in the 15th, with Fulham’s defenders flat-footed from a throw-in and simply pointing at each other to pick up runners.

Mings’ goal might have been the worst of the lot, from Fulham’s point of view.

Hourihane swung in a free kick from the left and Mings was left completely free to slide in and direct home a finish with his studs in the 48th.

“I apologize to Fulham supporters for our performance tonight,” tweeted Fulham owner Tony Khan, who added that his club has looked to add centre backs to the squad since winning the Championship playoff final at Wembley in August.

“I promise players in (and) better efforts from this squad.”

Fulham pressed in the second half without ever looking threatening, and was denied a goal by Bobby Reid because Aleksandar Mitrovic was adjudged to have bundled over Ezri Konsa before Reid tapped in following goalkeeper Emiliano Martinez’s fumble.

Martinez also tipped a fierce shot from Joe Bryan onto the crossbar in stoppage time.