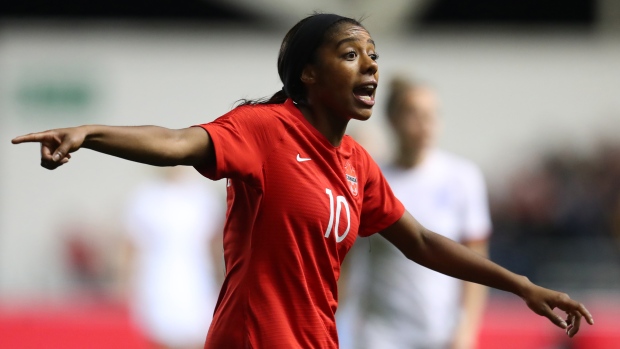 TORONTO — Ashley Lawrence, who played in all 15 internationals in 2019 and led the Canadian women in minutes played, has been named Canadian Player of the Year.

She joins KAA Gent forward Jonathan David, who was named top men's player on Wednesday in voting by Canadian media and coaches.

Lawrence, a 24-year-old from Caledon East, Ont., plays her club football in France for Paris Saint-Germain. Primarily a fullback with Canada, she also plays midfield for PSG.

One of the first names on the Canadian team sheet, Lawrence is mobile and technically gifted. She can take on opposing players, opening up space for teammates, and has the ability to deliver the ball to them.

"Ashley Lawrence is a fantastic, positive individual with great character and someone who looks at ways to improve her game all the time," Canadian women's coach Kenneth Heiner-Moller said in a statement Thursday. "She is a world-class player with a fast-paced drive on the ball. She has the ability to pass, cross and shoot with both feet. She is able to play at several positions on the highest level.

"In 2019, her leadership abilities continued to develop both on and off the pitch, providing a positive impact on both her younger teammates as well as her own game."

In 2019, Lawrence led Canada with four assists at the senior level and was named Canada Soccer Player of the Month in both June and November. She was one of four footballers to play in all 15 matches and was Canada's player of the match in the round-of-16 loss to Sweden at the Women's World Cup in France.

Lawrence helped PSG finish runner-up in the French league in 2018-19. The club has also qualified for the 2019-20 UEFA Women's Champions League quarterfinals.