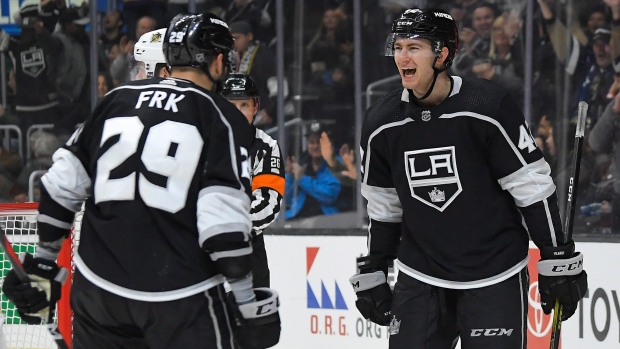 LOS ANGELES — Gabriel Vilardi had a goal and an assist in his NHL debut and the Los Angeles Kings began a five-game homestand with a 5-4 victory over the Florida Panthers on Thursday night.

Vilardi, who was the 11th overall pick in the 2017 draft, scored the fastest rookie debut goal in Kings history when he fired a wrist shot past Florida's Sergei Bobrovsky 86 seconds into the game.

The rookie centre scored 10 seconds after he came on during a line change, He took a short feed from Kurtis MacDermid just inside the blue line before firing it on net.

Vilardi then assisted on Martin Frk's goal with 1:18 remaining in the second period to put the Kings up 4-3 after two periods.

The Panthers tied it on Mike Hoffman's power play goal, his 23rd, 36 seconds into the third before Los Angeles' Ben Hutton delivered the game winner with 7:15 remaining when he got a rebound off his missed shot and chipped it past Bobrovsky for his fourth of the season.

Drew Doughty added a goal and an assist while Anze Kopitar had two assists to extend his points streak to four games. Jonathan Quick stopped 25 shots for Los Angeles, which snapped a three-game losing streak to Florida.

Panthers centre Aleksander Barkov scored a pair of goals and Jonathan Huberdeau had a goal and three assists to extend his points streak to five games (three goals, five assists). It is the forward's fourth four-point game this season.

Aaron Ekblad had two assists and Bobrovsky made 35 saves.

Both of Barkov's goals came in the first period. He tied it at 1 at 7:03 of the first with a wrist shot from the slot and then gave the Panthers the lead 100 seconds later with a wrist shot that Quick was unable to glove. Barkov has 20 goals this season, including six over his last 12 games.

Doughty evened it at 2 with 4:17 remaining in the first with a slap shot from just outside right faceoff circle while on the power play for his seventh. It is Los Angeles' second goal with the man advantage this month.

Huberdeau got his 22nd goal and third point of the night with a wrist shot on the power play 3:19 into the second. The Kings, though, regained the lead on goals by Trevor Moore and Frk. Moore's third goal of the season came at 10:18 when he redirected Doughty's shot in front of the net.

Panthers: Continue their five-game trip on Saturday against the Vegas Golden Knights.