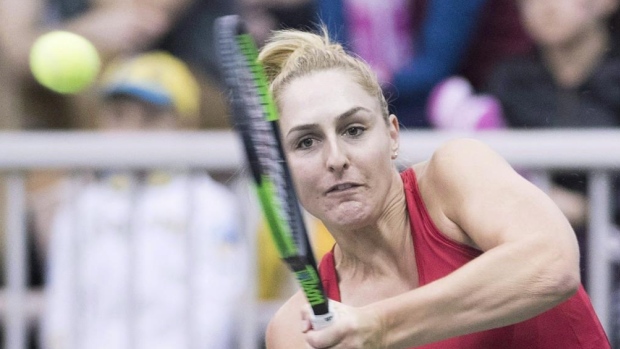 Gabriela Dabrowski's original plan for the Australian swing was to practise with her new doubles partner and get some training in during a two-week quarantine period in Melbourne.

A hard hotel room lockdown for the Canadian and dozens of other tennis players forced a significant change of plans. Instead of five hours outside daily within a bubble setting — mostly for on-court training and gym work — Dabrowski is stuck in her room 24-7 and counting down the days.

She's still planning to play in the upcoming Melbourne Summer Series ahead of the Australian Open, but her and American partner Bethanie Mattek-Sands will be going in cold for their debut as a team.

"We're probably just going to wing it," Dabrowski said with a laugh. "We don't have a whole lot of prep time now before our first event."

Dabrowski, the world No. 10 in women's doubles, has had a few different partners over the last few seasons. Mattek-Sands holds the No. 22 position.

Their preparation as a duo will be limited to talking strategy, discussing strengths and weaknesses, and trying to figure out a game style.

"In terms of level of play, we're going to fight like hell," Dabrowski said in a recent interview from Melbourne. "But I'm not exactly sure of the level that can be expected."

Dabrowski also will team up with Croatia's Mate Pavic in mixed doubles at the Feb. 8-21 Australian Open.

The 28-year-old Ottawa native won her first Grand Slam title at the 2017 French Open with India's Rohan Bopanna. She then took the Australian Open mixed title in 2018 with Pavic, one of 11 career doubles titles on her resume.

Last weekend, word emerged of some positive COVID-19 cases from passengers who arrived on charter flights bringing people to Melbourne from a variety of departure points. The first six positive tests were connected to flights from Los Angeles, Abu Dhabi and Doha, Qatar.

Passengers were classified by local health authorities as close contacts of people infected with COVID-19 and forced into hard lockdown. Anyone who tested positive was transferred to a medical hotel.

Dabrowski, who arrived on Jan. 15 from Los Angeles, was advised the next morning of the quarantine plan change.

"It's definitely a difficult situation," she said. "But I've been keeping quite busy for myself."

Dabrowski has been reading, catching up on TV shows and is taking online courses at Indiana University East. Workouts in her standard-sized hotel room are limited to use of a stationary bike, skipping rope, kettlebell and stretching exercises.

"So if I feel a little bit down, I just look outside."