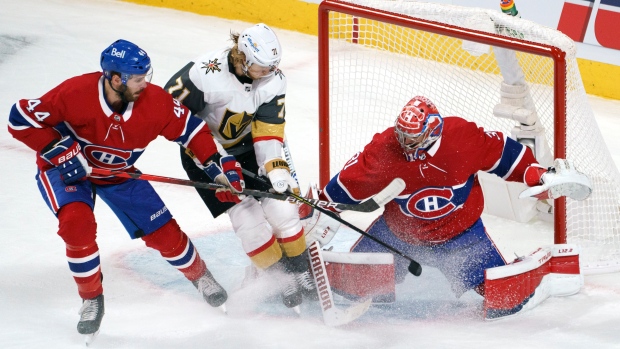 Nicolas Roy opened the scoring but Cole Caufield responded quickly as the Montreal Canadiens and Vegas Golden Knights are tied 1-1- heading to the third period of Game 3.

Roy opened the scoring at 3:16 of the second period when Eric Staal gave the puck away in front of Carey Price, allowing Roy to fire it up and into the net.

Caufield responded 38 seconds later when Nick Suzuki sent him on a breakaway and he fired the puck over Marc-Andre Fleury’s shoulder to tie the game.

The Golden Knights had two power play opportunities in the second frame but were unable to score with the man advantage. They are 0-for-4 in the game.

Tomas Nosek took a tripping penalty with 18 seconds remaining in the period and the Canadiens will start the third on the power play.

Price stopped 12 of 13 second period shots. The Canadiens’ struggle to generate offence continued as Fleury needed to make just 5 saves in the period.

The Golden Knights are outshooting the Canadiens 30-8 through two periods.