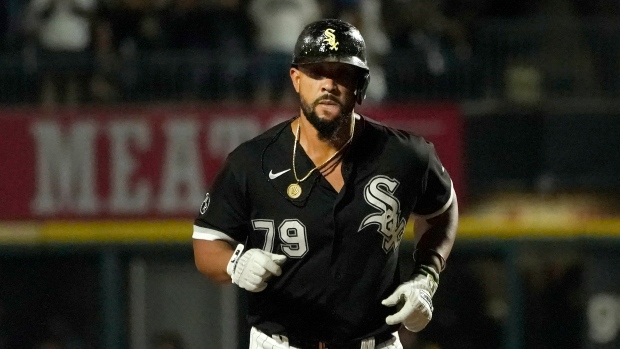 CHICAGO (AP) — The Houston Astros found themselves in familiar territory Monday, brushing aside comments by Chicago White Sox reliever Ryan Tepera after he implied they stole signs while winning the first two games of the AL Division Series in their ballpark.

“He can say what he wants to say,” Astros manager Dusty Baker said. “I had never even heard his name before we played the White Sox. I’m not bothered by it. Most of my life, they’ve been talking stuff on me anyway. Let them talk.”

Baker pointed out the Astros had similar offensive statistics at home and on the road, then offered some advice while mentioning he had listened to Eric Clapton that morning.

The Astros were disciplined by Major League Baseball after it found the team used electronics to steal signs during their run to the 2017 World Series title and again in the 2018 season. It remains a sensitive subject, and Tepera shined another light on it with his comments after the White Sox won Game 3 Sunday to avoid a sweep.

Houston outscored the White Sox 15-5 in winning the first two games at home. Chicago averted a sweep with a 12-6 win on Sunday night.

The Astros lead the best-of-five series 2-1. Game 4 got postponed Monday because of forecast rain, and the teams are set to play Tuesday.

Carlos Rodón is scheduled to start for Chicago, with Game 1 starter Lance Lynn available out of the bullpen. Manager Tony La Russa said Lynn or Lucas Giolito would start a potential Game 5 Wednesday at Houston depending on how things go on Tuesday.

The Astros opted to go with Lance McCullers Jr., hoping he can close out the series after delivering a dominant start Thursday in the opener. José Urquidy was set to pitch on Monday.

But much of the talk in the wake of Game 3 centered on Tepera’s comments. And Houston third baseman Alex Bregman shrugged them off.

The Astros put themselves in position to sweep after two impressive victories at Minute Maid Park. But they whiffed 16 times in Game 3 at Guaranteed Rate Field after striking out a combined 16 times in the first two games.

“Yeah. It is what it is,” he said. “They’ve obviously had a reputation of doing some sketchy stuff over there,” he said. “It’s just, we can say that it’s a little bit of a difference. I think you saw the swings and misses tonight compared to, you know, the first two games at Minute Maid. But that’s not really the story, you know? We come here to play. We’re going to compete. We’re not going to worry about what they’re going to do.

“All we have to do is execute pitches and they can’t hit them anyways," he said.

La Russa said he was aware of Tepera’s remarks, but hadn’t read them.

“This is America, and players on our side can say what they want to,” he said. “I think that they’re a very good team and they’re tough to beat. That’s what I think.”

MLB’s investigation found Houston used a video feed from a center-field camera to see and decode the opposing catcher’s signs during home games. Players banged on a trash can to signal to batters what was coming, believing it would improve the their odds of getting a hit.

Manager A.J. Hinch and general manager Jeff Luhnow were suspended and fired in the fallout, but no players were punished after Commissioner Rob Manfred granted them immunity as part of the league’s investigation.

Suspicions linger, though. And players who were around back then still hear it from the crowd when they go on the road.

“They’ll probably have to deal with it forever, really, because people don’t forget,” said Baker, in his second season with Houston. “They pass along information seemingly from one generation to the next. This is just something, I feel badly, but this is something we have to deal with.”

Sign stealing is a legal and time-honored part of baseball as long as it is done with the naked eye — by a baserunner standing on second, for example. Using technology is prohibited.

La Russa said he suggested a “novel” approach to combating sign stealing when he worked in the league office. And he “could see why they ignored it.”

His idea? Have runners on second base face center field until the umpire tells them to turn around.

“Some teams do it legally. They invest a lot of (time) trying to see what the signs are, figure out what the sequences are. I think it’d put an end to it, and it’s pretty simple,” La Russa said, laughing.