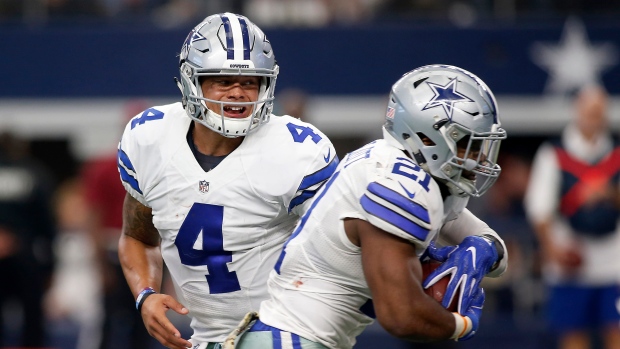 Last night’s Kansas City Chiefs-Oakland Raiders tilt, with driver’s seat in the AFC West on the line, could have been the Game of the Week this week, but the old AFL rivals were the latest to fall under the Thursday Night curse, and combined for just 567 total yards in the Chiefs 21-13 win.

That opened the door for another clash to claim Game of the Week honours, and with just four weeks left in the regular season, there are plenty of contenders.

First, a quick look at the playoff picture in the AFC and NFC:

With Thursday’s win, the Chiefs took over the AFC West and put themselves in position for a bye into the divisional round. The Ravens and Steelers are battling for the AFC North while there’s a three-way tie for the AFC South lead and, unfortunately, a home playoff date.

In the NFC, the Cowboys have already clinched and are in position for a playoff bye alongside the Seahawks. The Falcons and Buccaneers are battling for the NFC South and a home playoff date with the loser falling into a wild card spot. Washington’s tie against the Bengals earlier this season could loom large, they’re just a half-game behind in the wild card chase.

Now a look at the games that matter in Week 14 of the NFL season:

Rookies Dak Prescott and Ezekiel Elliott have Cowboys fans walking on clouds this year, and win against the division rival Giants would make those clouds even fluffier.

Dallas is the first team to clinch a playoff spot by virtue of their 11-1 record through 13 weeks of the season, they need one more to clinch the NFC East. While the team surely has their sights set on a loftier goal like a bye to the divisional round and home field advantage throughout the playoffs, beating the Giants would give Cowboys fans just their second home playoff date in seven years.

The Giants certainly aren’t going to rollover though. Even with a win this week it’s unlikely New York can make a run at the division title, but the Giants need to keep winning to hold onto the top wild card spot – New York is a game up on the sixth seed and 1.5 games clear of falling out of the playoffs.

Jumping to the AFC, Week 14 finishes with another crucial meeting. After the Raiders’ Thursday night loss, the host Patriots now control their own destiny for home field advantage throughout the AFC playoffs. The AFC East is in the bag, and very likely so too is a first round bye, but a win over the Ravens would all but secure that and go a long way to earning the No. 1 seed.

The Ravens meanwhile, are in a battle with the Steelers for the AFC North title. Winning that battle virtually guarantees a home playoff date at the No. 3 seed while the consolation prize could very well be missing the playoffs. The Ravens have by far the harder schedule down the stretch (opponent’s record down the stretch: 26-21-1 to the Steelers’ 17-30) so it will be imperative to steal a game against a tough team like the Pats.

Back to the NFC for a late afternoon start. The Seahawks still have an outside shot at finishing first in the NFC but with the Lions just a half-game behind them in the race for a first-round bye, this game is more about maintaining their spot.

The Packers meanwhile, are in unfamiliar territory – must-win mode. Like the Seahawks, Green Bay is hoping for the Lions’ to stumble down the stretch but their situation is a little direr. The Packers will need a win Sunday in a tough game against the Seahawks and likely still some help to grab the NFC North title, but have a better chance to sneak into a playoff spot, just one game out of sixth seed but with Washington standing in their way a half-game up.

A late season Texans-Colts matchup, with both teams sitting at .500 shouldn’t matter that much. It definitely shouldn’t be a crucial game that could potentially decide a division title. But every division gets to send at least one team to the playoffs so here we sit.

The other team in this three-headed dog (boom), the Titans, will be hosting a bona fide playoff team 1,000 miles away at the same time. Consider these AFC South battles a nice little warmup before the big games get underway.

If you’re not enthralled with the AFC South chase, the Bills and Steelers’ afternoon clash carries a lot of weight as well.

As mentioned earlier, the Steelers are in a battle with the Ravens for a division title and home playoff date. Pittsburgh’s in a much easier matchup so it’s imperative they come away at least still tied with Baltimore in the standings.

The Bills meanwhile, are still mathematically in the mix for the postseason but in must-win territory. That should at least ensure a competitive game.