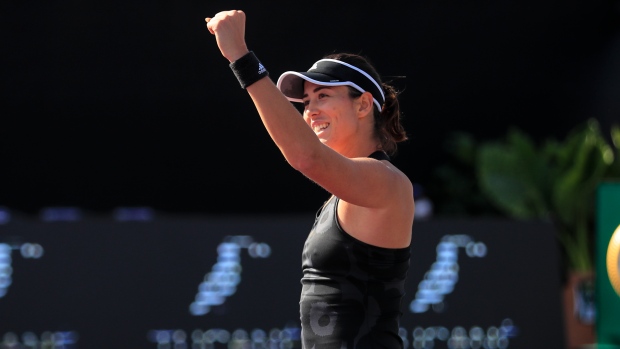 GUADALAJARA, Mexico (AP) — Garbiñe Muguruza dominated Paula Badosa in a 6-3, 6-3 victory on Tuesday and will play Anett Kontaveit for the title at the WTA Finals.

Kontaveit lost to Muguruza in the last match of the round-robin stage, and has a 2-3 career record against the two-time major winner.

The sixth-seeded Muguruza, a losing semifinalist in 2015, is the first Spanish woman to reach the singles final since 1993, when Arantxa Sanchez-Vicario was runner-up to Steffi Graff.

“I'm very happy with my performance. It was the best match I played here in Guadalajara,” Muguruza said. “It's the first time we encountered each other. I'm very proud of Paula, she started the year back in the rankings and made all the way to the top 10."

She opened this year's WTA Finals with a loss to third-seeded Karolina Pliskova but bounced back with victories over second-seeded Barbora Krejcikova, Kontaveit and Badosa.

The former No. 1-ranked Muguruza broke seventh-seeded Badosa's serve in the third game and took the first set in 35 minutes.

In the second, Muguruza had a service break in the second game, saved a couple of break points in the third and never looked back.

Badosa finished a breakthrough season that saw her crack the top 10 for the first time.

“It was a tough day, I did not feel myself and she played good, all the credits go to her,” said Badosa, who earlier in the tournament said that Muguruza had been her tennis inspiration. “I don't really know what happened today. I'm sad that I could not compete."

On the way to the final, Kontaveit beat Krejcikova and Pliskova before her group-stage loss to Muguruza.

She now boasts a 29-3 record at her last eight tournaments and could rise to No. 6 in the rankings if she wins the title here.

Her win on Tuesday gave Kontaveit her 48th win of 2021, equaling Ons Jabeur for the most this season.

“I´m very excited to reach the finals. I was already so proud to make it to this tournament," Konteveit said. “The last few months have really showed me that I can play really well and beat great players consistently and to have self-belief.

“When I came here, I had nothing to lose but then I started to win and felt like I can win.”

Sakkari now has a 3-14 record in semifinal matches, winning one of eight this season.

“It´s just very tough for me to talk about all this. Today, I have to say, was a missed opportunity,” Sakkari said. “Today I was just very close on taking that chance. I just wasted it. That’s why it hurts so much. It’s not that it was just bad luck, it’s that I threw away another chance. It hurts”.

The WTA Finals are being played in Guadalajara for this year only, with the event scheduled to return in 2022 to Shenzhen, China.