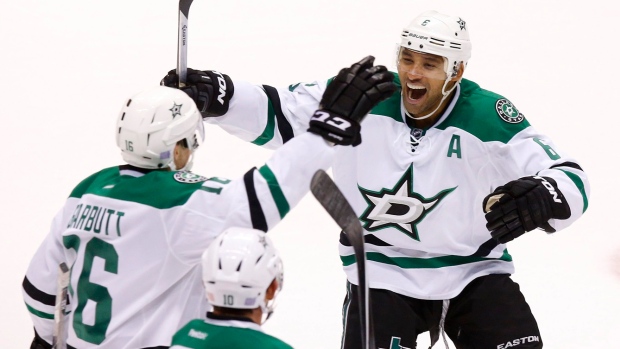 GLENDALE, Ariz. - Mired in a seven-game losing streak, Tyler Seguin and the Dallas Stars were looking for a spark.

They got it seconds into the game Tuesday night when captain Jamie Benn got into a fight with Arizona centre Martin Hanzal. The Coyotes scored moments later, but the Stars rallied with two late goals for a 4-3 victory.

Ryan Garbutt scored the winner on a short-handed breakaway with 1:16 left. He knocked the puck to himself off the boards in the defensive end and took it all the way for a forehand that beat goalie Mike Smith.

"I was just trying to hold onto it and make sure I cleared it, and I didn't really have anyone come to me, so I just tipped it to myself and skated as fast as I could," Garbutt said.

Seguin has 12 goals and ranks among the NHL leaders. He said the team was looking for leadership during the slump.

"The last few games Jamie and I have been talking and saying we want to do something like that, and he got it out of the way first shift," Seguin said. "It's what a captain has to do sometimes."

Dallas trailed 2-0 until late in the second period when Seguin put in a deflected shot from Jordie Benn at 17:59. Less than a minute later, with the Stars on a power play, Seguin collected a shot sent through the goal mouth by Jason Spezza and scored to tie it.

The Stars, who had been outscored 21-9 after the second period entering Tuesday's game, took a 3-2 lead on Cole's goal at 15:19 of the third.

The Coyotes tied it 58 seconds later on Mikkel Boedker's goal.

Connor Murphy and Joe Vitale also scored for Arizona. Vitale's goal, at 11:46 of the second period, was his first of the season and first with the Coyotes after signing with the team in the off-season from Pittsburgh. Murphy got an assist.

The Coyotes were shut out again on power plays, the fourth straight game in which they have failed to score in such situations. Arizona is 0 for 18 over its last four games.

"We are going to have to look at some stuff, whether we want to change some personnel on it or something," coach Dave Tippett said. "You get a power play with 2 minutes to go in the game and the power play is your best players on the ice, and you give the game away, it's really disappointing."

The game got off to an interesting start, with Hanzal and Jamie Benn tussling right after the opening faceoff. No big punches were landed and both received 5-minute penalties for fighting.

Murphy's wrist shot through traffic hit the crossbar and caromed into the net at 18:18 of the first period to open the scoring.

Before Hanzal and Benn left the penalty box, they were joined by Kyle Chipchura of the Coyotes and Brenden Dillon of the Stars, who exchanged punches and were whistled for fighting.

The Stars were fortunate to escape the first period having allowed just one goal. They totalled 14 penalty minutes, faced 17 shots and killed 4 minutes in penalties.

Moen could join the Stars in time for their game at Los Angeles on Thursday.

Gonchar, in his 20th NHL season, spent all of last season with Dallas.

"With Sergei going out it frees up a spot for a young defenceman to come in and play. We've had all left-handed defencemen and we think a lot of (rookie John) Klingberg, so that's one part of the trade," Stars coach Lindy Ruff said. "Moen, he's been a winner. He's won on previous teams he's played for and he's got some bite to his game. We know he's a little bit of a role player now and he should help us."

NOTES: The 22-year-old Klingberg made his NHL debut. A fifth-round draft pick in 2010, he was recalled from Texas of the AHL on Monday. ... Moen will wear No. 27 with the Stars. ... Tippett reached 391 games with the team, surpassing Bob Francis as the franchise leader. ... D Keith Yandle became the 13th NHL player since 2000-01 to play in at least 400 consecutive games. He's the second player in franchise history to reach 400, along with Dale Hawerchuck (with Winnipeg).