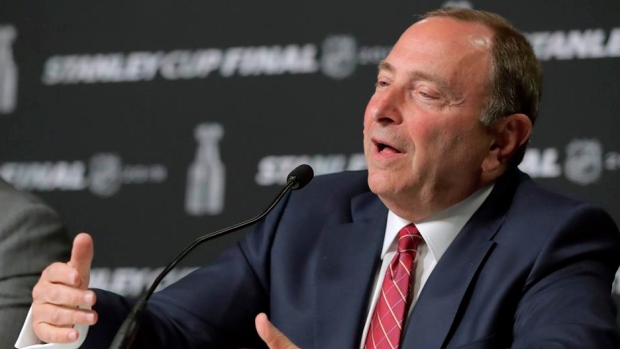 There is plenty of runway left for the NHL to resume the 2019-season.

That is the message NHL commissioner Gary Bettman delivered in an interview with NBC Sports Network’s Mike Tirico on Tuesday, saying that the league is still weeks away from making a decision on whether to drop the puck again.

“I think right now, there’s too much uncertainty,” Bettman told NBCSN. “Hopefully we’ll all know more by the end of April.

“We’re all going to have to wait until we have a lot more information, maybe in the next few weeks, before we can make any decisions.”

There also does not appear to be a limit on how deep the NHL is willing to play into the summer to award the Stanley Cup in 2020. The NHL could lose approximately $1.1 billion in revenue, responsibility for half of which falls to the players, if the remainder of the season is not played.

Bettman confirmed the fact that the Tokyo Olympics, which were scheduled to take place from July 24 to Aug. 6, have been postponed to 2021 provides the NHL with a deeper window to play games.

Previously, the NHL’s two concerns with playing into July and August were network commitments and arena availability. NBC is the sole U.S. television rightsholder for the NHL and the Olympics is also their marquee sports property; there is now a hole to fill in that schedule.

In that case, Bettman said sweltering summertime temperatures and the league’s ability to produce playable ice surfaces are “the least of the issues we’re focused on.”

“It doesn’t even pay to speculate because nobody in any of the sports knows enough now to make those profound decisions,” Bettman said.

Sources say the NHL has not contacted arena staff or investigated the potential of hosting games at University of North Dakota’s sparkling Ralph Engelstad Arena, as has been reported.

“From an NHL standpoint, and I’m sure this is what the other leagues are doing, we’re viewing all of our options,” Bettman said. “We want to be ready to go as soon as we get the green light.”

The problem the NHL is facing, as Bettman acknowledged, is the “green light may not be crystal clear because there may still be some places in the country that you can’t play and other places where you can.”

It’s an even more multi-layered approach when you factor in hockey’s unique border-crossing situation, plus the fact that many players have already returned home to Europe, where different travel restrictions may be in place.

Bettman joined U.S. President Donald Trump on a conference call Saturday with other sports leagues commissioners and representatives. He said the call was a “very cordial, constructive conversation,” but the “uncertainty of the times weren’t clarified in that call.”

“Our first focus is keeping everybody healthy and safe,” Bettman said. “We want to get back to playing for our fans, and for the love of the game, as soon as it makes sense and is safe to do so.”