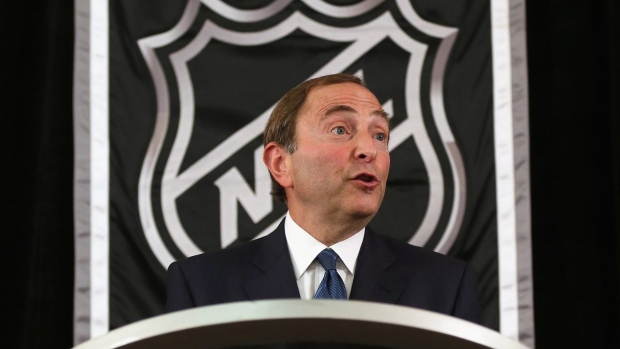 Speaking publicly for the first time since the Stanley Cup Final, NHL commissioner Gary Bettman said Wednesday at a virtual sports conference that the league’s targeted Jan. 1 start date remains “a work in progress influenced largely by what we’re hearing from medical experts.”

Bettman did not move off the Jan. 1 target, no matter how unrealistic it may be to pull off now, while COVID-19 numbers continue to skyrocket across North America and the NHL and NHL Players’ Association remain at odds over the financial terms of the 2021 season.

“COVID is going through a second wave, which could be worse than the first wave,” Bettman said. “And between [U.S.] Thanksgiving and the aftermath and what they think is going to happen for Christmas and the aftermath, we are taking our time and making sure that, as we look for ways to move forward, we’re focused on health and safety and doing the right things.”

Health and safety concerns are only part of the reason why the NHL has not nailed down a date to drop the puck in 2021.

The NHL has requested players defer additional salary for the 2021 season, an ask that temporarily iced communication between Bettman and NHLPA executive director Donald Fehr.

But on Wednesday, in conversation with FOX Business host Liz Claman at Sports Business Journal’s 2020 Dealmakers in Sports virtual conference, Bettman said the NHL is “not seeking to renegotiate” the six-year Collective Bargaining Agreement extension that was unanimously ratified by owners in July.

“We’re not actually having negotiations and we’re not seeking to renegotiate,” Bettman said. “We made a number of assumptions collectively over the summer, most of which are not applicable anymore.

“Whatever the revenues are, the players only get 50 per cent. And if we overpay them and they don’t pay us back in the short term, they have to pay us back over time. There will be stresses on the system, and we’ve had discussions about what those stresses are, and how they might be dealt with. But we’re not trying to say ‘You must do X, Y and Z.’ We’re trying to look for ways to continue to work together.”

Bettman said it was “unfortunate” and “inaccurate” that the NHL’s ask has been “portrayed as something else” by the media.

The NHLPA declined to comment on Wednesday when presented with Bettman’s remarks and his characterization of the NHL’s financial ask.

While Bettman is correct in the NHL has not asked for an amendment to the total amount of money changing hands between the NHL and NHLPA, others do see it as a “renegotiation” since the terms of player salaries for the 2021 season were specifically spelled out in the Memorandum of Understanding ratified in July.

Players are due 72 per cent of their stated salaries in 2021, with 20 per cent taken off the top to owners to repay their revenue shortfall from 2019-20’s paused season, followed by a 10 per cent deferral that will be repaid by owners in three seasons.

The NHL has asked players to defer an additional 16 per cent in salary to aid in owner cash flow for 2021, and also requested amendments to the escrow caps for later years in the deal to better balance how quickly the owners’ loan to players is repaid.

Because revenue projections are short for the 2021 season, and the $81.5-million salary cap is delinked from revenue, it is possible the players’ debt to owners will balloon to $2 billion by the end of next season.

Simply put, Bettman and the owners would like to change the repayment terms of the loan. The problem is, that isn’t what both sides agreed to just five months ago in the middle of the pandemic.

Bettman said it’s possible the “players owe us more money than anybody imagined,” even though best, moderate and worst-case revenue scenarios were all fully modelled for both sides during negotiations, according to sources.

“If we have to pay out lots of cash, two-thirds of which is going to come back to us, that may cause some stress, but we’ll have to deal with it if we’re going to move forward,” Bettman said.

In a not-so-subtle way, Bettman sent a message to players listening on Wednesday, saying that the longer the debt lingers, the lower future salary caps will be, thus limiting future earnings.

Bettman said: “The fact is, if I’m a player and I’m looking at a cap that is going to be basically flat for the entire term of what is now a six-year collective bargaining agreement and players for the next five or six years are going to be repaid what was overpaid, they have to ask themselves: ‘Does this make sense?’”

When asked by moderator Claman if the financial impasse is enough to kill the season, Bettman said, “There are letters in the agreement that were put in for our benefit in the event things got out of control, so we each have rights which we can adhere to.”

“I’ll be very clear: We have been absolutely unequivocal with the players that we’re not attempting to renegotiate,” Bettman said. “I think this is the most important thing: What we’re focused on is trying to get through the 2021 season so we can be back in position for 2021-22 to [get back to] normalcy. Based on everything that we’re hearing, we can look at normalcy by the time we get to '21-22 with whatever happens this season.”