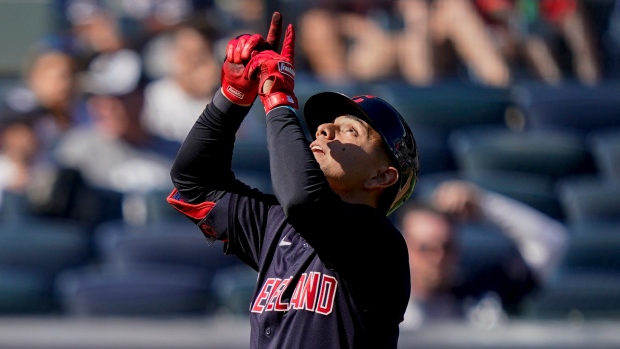 “Definitely a play there that I’m used to making, especially this year. I thought I’ve been very good catching those flies,” Sánchez said through a translator. “I think this is the first one I missed this year but just a bad read there with the fly ball

Franmil Reyes hit an RBI double off Albert Abreu in the big fifth inning and a two-run homer in the sixth against Andrew Heaney.

Yu Cheng put the Indians ahead with a second-inning homer off Luis Gil (1-1) and added a two-run double in the fifth against Abreu. José Ramírez hit his 34th homer in the eighth against Heaney.

New York has 13 games left and began the day a half-game ahead of Toronto for the second AL wild card. The Yankees dropped 1 1/2 games behind wild card-leading Boston.

Yankees manager Aaron Boone said the foul popup was a play Sánchez had to make.

“He just missed it,” Boone said. “Obviously, any time a popup to the catcher right behind home plate, it has that backspin, so it kind of comes back but catchers are usually prepared for that.

“Gary’s actually usually good with popups. I think he probably got a little to upright and didn’t move enough as it kind of worked its way back to the field but yeah you got to make that play.”

A day after the Yankees won the series opener 8-0, they fell behind 10-0 by the sixth inning on Don Mattingly Bobblehead Day. The former Yankees captain was a six-time All-Star but missed the playoffs in all but one of his 14 big league seasons.

Sánchez failed to tag out the Mets’ Jonathan Villar last weekend when Joey Gallo’s throw reached the plate 20 feet ahead of him, then was criticized by manager Aaron Boone after failing to prevent two costly wild pitches in Thursday’s 3-2, 10-inning loss in Baltimore.

Sánchez overran a foul pop behind the plate by Oscar Mercado in the fifth inning on the sunny afternoon, misreading the backspin as the ball fell on the dirt behind the plate. He was charged with his sixth error.

The Yankees have made 92 errors, fourth-most in the major leagues.

Mercado slammed his bat in frustration thinking the at-bat was over but returned to the plate and was hit by a pitch.

“I think I got under it too much and when the ball is coming down it has backspin and I wasn’t in a good position to catch it there,” Sánchez said, “but you got to put it aside and the next time it happens you got to find yourself in a better position and make that play,”

Giancarlo Stanton and Luke Voit hit late homers for New York, which has lost 14 of 21 following a 13-game winning streak. Gallo left after the third inning because of neck tightness.

Aaron Civale (11-4) pitched six scoreless innings of four-hit ball in his third start since returning from missing over two months with a sprained middle finger on his right hand. It was his third career scoreless start of at least six innings and Civale did it with several family and friends from his hometown of East Windsor, Connecticut, in the crowd.

Cleveland is just 72-74 and won for only the third time in 11 games after allowing five homers in Friday’s series opener.

“It was good to see us play that kind of game after yesterday,” Indians interim manager DeMarlo Hale said.

Mercado’s hit by pitch began a string of six straight hitters to reach base. Ramírez walked and Reyes greeted Abreu with a double over leaping third baseman DJ LeMahieu.

Cheng doubled for a 4-0 lead and Owen Miller hit an RBI single through the drawn-in infield.

“No, not at all,” Gil said when asked if he lost focus after Sánchez’s miscue. “We need to understand we’re humans and we’re going to make mistakes from time to time. It was a difficult fly ball for Gary.”

Indians: RHP Shane Bieber (strained right shoulder) will throw four or 55-60 pitches in a minor league rehabilitation appearance for Double-A Akron on Sunday. Bieber has been on the injured list since June 14. … 1B Bobby Bradley (hip) was held out of the lineup.