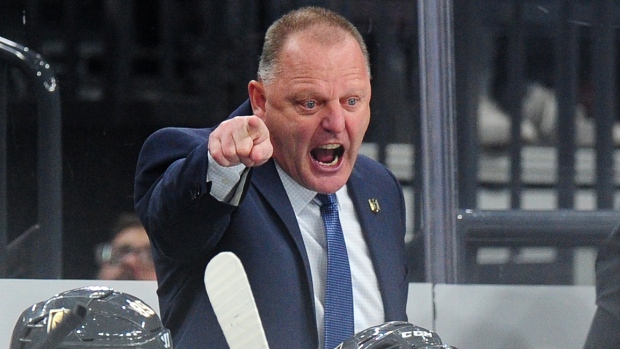 The man who brought the Golden Misfits together was made to be the misfit on Wednesday.

Kelly McCrimmon’s first bold move as the Golden Knights’ general manager sent shockwaves around the NHL given Gallant’s sustained success in the desert – and the fact that Vegas is right in the mix this season.

Yes, the Golden Knights awoke on Wednesday outside of a playoff position, but they are also just three points out from first place in the jam-packed Pacific Division.

In fact, Vegas had the best points percentage in the Pacific at the exact midpoint of the schedule, which is why Gallant was named the head coach of the division’s entry in next week’s All-Star Game.

The NHL will be forced to find new bench boss for the Pacific, where Vancouver Canucks coach Travis Green is somehow now the longest-tenured guy in the division, even though he was only hired in April 2017.

“In order for our team to reach its full potential, we determined a coaching change was necessary,” McCrimmon said in a statement. “Our team is capable of more than we have demonstrated this season.”

Gallant’s firing marks the seventh in-season coaching change this year, tying this 2019-20 campaign for the second-most turbulent in NHL history. Yes, it’s been a different year with two coaches losing their job due to conduct (Bill Peters and Jim Montgomery), but they are coaching changes nonetheless.

Woodley: Not overly surprised by Gallant firing, as Vegas bleeds chances in front of Fleury

Kevin Woodley admits he's not overly surprised by the Gerard Gallant firing, as Vegas simply doesn't play solid defense in front of Fleury. Kev says it cost Vegas the Cup, other teams have noticed what worked against VGK, and Gallant didnt' adjust. Kevin also says the Canucks do seem hesitant to start Demko, but that has to change as Markstrom will hit a fatigue wall

So it's seven coaches and one GM canned (New Jersey’s Ray Shero) in the 55 days since Mike Babcock was fired on Nov. 20. His successor, Sheldon Keefe, is suddenly the 26th longest-tenured coach.​

Even more wild: Joel Quenneville has been at the helm for just 45 games in Florida and he is the 18th longest-tenured coach in a 31-team league.

Let that sink in for a moment.

Undoubtedly, in-season coaching changes have always been en vogue in the NHL, but especially so in the past decade. Four of the last 11 Stanley Cup champions changed their coach mid-year. The St. Louis Blues were the last to do it last spring when Craig Berube led them to the top while still wearing the interim tag.

Two of those replacement coaches (Darryl Sutter and Mike Sullivan) won a second Cup with the same team. Berube and the Blues are well positioned to make it three.

DeBoer and John Hynes, now in Nashville, both lasted exactly 34 days in the unemployment line. DeBoer was fired by the rival San Jose Sharks on Dec. 11.

Gallant may cause a further ripple in the coaching ranks. The proud Summerside, P.E.I., native will likely remain out of work only as long as he wishes.

Will Gallant’s availability make the expansion NHL Seattle franchise jump? Gallant has one full season remaining on his contract. He could theoretically get paid by Vegas to sit out next season, the last before Seattle joins the league, and then join the league’s 32nd club with minimal expense to Seattle.

No one has coached an expansion franchise to the heights Gallant reached with Vegas.

The Golden Knights made it to the Stanley Cup Final in their first year of existence - a feat that is unlikely to be equalled.

But another more imminent Stanley Cup contender might want to pounce on Gallant in the meantime, because his success on The Strip wasn’t just a flash in the pan.

Gallant led the Golden Knights to a 118-75-20 record in parts of his three seasons there, winning the Jack Adams as coach of the year to go along with a .601 points percentage, the ninth-best regular season record in the NHL over that span. His 16 playoff wins ranked second.

There is probably a dark poem to be written about the impact that phantom major penalty call that in Game 7 last spring had on both Gallant and DeBoer. That was a first-round series for the ages, with the Sharks erasing a four-goal deficit in the final 10 minutes of Game 7 after Cody Eakin was incorrectly whistled for a five-minute major that ultimately spurred a rule change.

With the chirping going back-and-forth that series, Gallant called DeBoer a clown. Now their legacies are linked.

But for now, the story is one marked by surprise. At least this time, Gallant appeared to leave Vegas with his dignity intact instead of waiting for a cab after being unceremoniously fired by the Panthers back in 2017.​

He won’t have to wait long for a pick-up now.