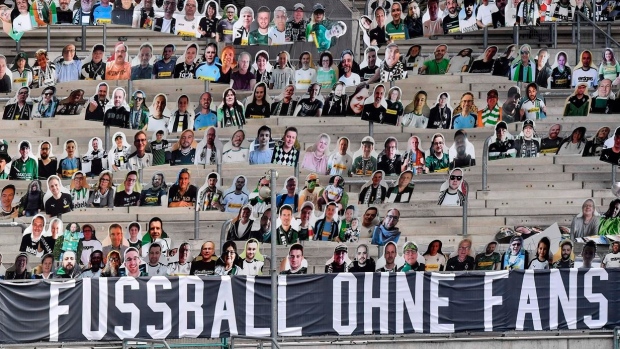 “Thousands of fans in the stadiums – that doesn’t fit with the current situation with infections. Now it’s about not taking any unnecessary risks,” national health minister Jens Spahn said on Twitter of the coronavirus pandemic on Monday.

The 36 clubs in Germany’s top two divisions had been planning on having limited numbers of socially distanced and seated supporters at games, and had produced a proposal last week that included prohibiting away fans, restrictions in standing areas of stadiums, and a ban on sales of alcohol. They mooted personalized tickets to help with contact tracing, though those plans have been criticized by fans.

“The league’s concept is good in theory,” Spahn said. “But what’s decisive is what happens every day in practice.”

In a follow-up tweet, Spahn added, “We feel that we have to stay alert. Having spectators in the stands would be the wrong signal in the current situation.”

Germany’s 16 state health ministers met on Monday and agreed that having fans in stadiums for league games was not a priority.

Germany has registered 217,835 coronavirus infections, and a relatively low number of deaths at 9,203 compared to neighbouring France, Spain and Italy, but there has been some concern over a recent increase in the daily rate of new infections.

Last week, Germany recorded its highest daily tally of new infections in three months. The national disease control centre, the Robert Koch Institute, said 1,045 cases were recorded last Wednesday — the first time since May 7 that it has counted more than 1,000 cases in a day.

Berlin health senator Dilek Kalayci said on Monday the ministers came to a unanimous position that stadiums should remain closed to fans based on the current pandemic situation.

“In terms of health policy, we are currently not in favour of opening the stadiums until Oct. 31, at least. Then you can discuss the situation again,” Kalayci said.

Bavarian governor Markus Söder had been one of those most vocally in favour of the Bundesliga resuming without fans after its two-month break last season, but he said allowing fans to attend games when the new season begins on Sept. 18 would send the wrong signal.

“It would send a devastating signal to the public, both in terms of what it means for medical capacities and in relation to cultural events,” Söder said.