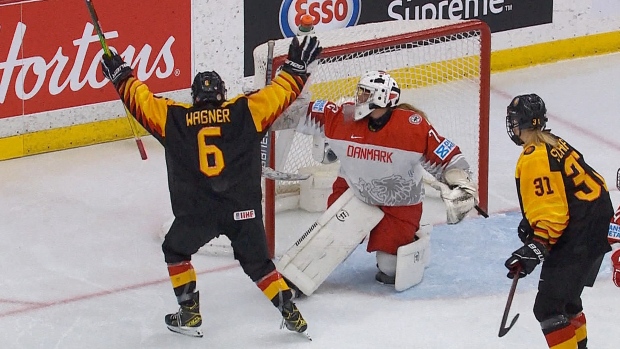 CALGARY — Jule Scheifer and Theresa Wagner scored 3:09 apart in the second period to put the game out of reach, and Germany went on to beat Denmark 3-1 on Monday in round-robin action at the women's world hockey championship.

Jennifer Harss made 21 saves for the victory.

Josefine Jakobsen ruined Harss' shutout bid midway through the third period for Denmark (0-3-0), which got 23 saves from Cassandra Repstock-Romme.

Germany sits second in Group B behind the Czech Republic, which blanked Japan 4-0 on Monday to collect its third win and remain undefeated.

Klara Peslarova earned a 24-save shutout for the Czech Republic (3-0-0). Japan (1-1-0) took its first loss after opening the tournament with a win over Denmark.

On Tuesday, the United States will face Russia, and Canada will play Switzerland in Group A action.

All five teams in Group A and the top three in Group B will advance to the quarterfinals.

The 10-nation world championship underway in Calgary is the first in more than two years. The tournament was rescheduled and relocated to the Alberta capital this month because Nova Scotia refused to hold it in May.

This report by The Canadian Press was first published August 23, 2021.