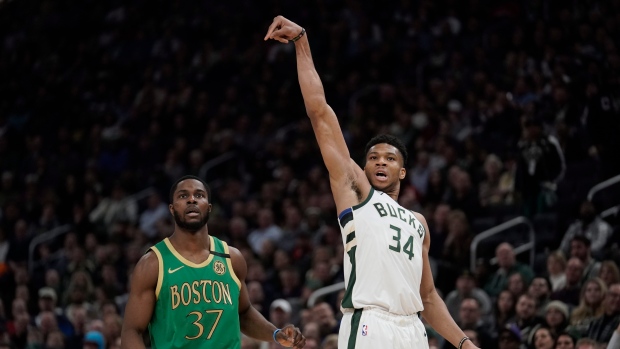 Giannis Antetokounmpo had 32 points and 17 rebounds, Khris Middleton scored 23 and the Bucks held off the Boston Celtics 128-123 despite blowing two separate 20-point leads.

“We were up 20 twice and they came back,” Antetokounmpo said. "... We didn’t play the best basketball and how we usually play. I was kind of upset after the game. We talked in the locker room. We talked to one another. We were up 20 and we won but we’ve got to play for 48 minutes.

"Coach Bud came in here and he was steaming hot. He was angry and that’s good. He doesn’t really care about this game or the next game. He cares about how we can get better and how can we be good for 48 minutes. That’s what our goal is.”

Despite the lapses, the NBA-leading Bucks (37-6) extended their winning streak to five games, while Boston lost its second game in as many nights.

“It's a very long season, still,” Celtics guard Kemba Walker said. “We got so many games to play. When you have losses like this, you just have to learn from it, and I think we will.”

Walker scored a game-high 40 points to lead Boston, which took the floor without Jaylen Brown. The 6-foot-6 forward suffered a sprained right thumb in a 13-point loss to Detroit on Wednesday.

“We saw a play late in the first half and we think that might have been when it happened," Celtics coach Brad Stevens said. "Maybe it got worse as the game went on. He didn’t say much about it at halftime. Certainly, after the game it was sore. Today, more sore.”

Stevens said the training staff will do more tests on Brown's thumb on Friday.

Marcus Smart, who started in place of Brown, had 24 points.

“Coming off a back-to-back night, we knew that it was going to be tough,” Smart said. "But we didn't want to let that be an excuse. We just continued to fight and fight until we got to where we wanted. We gave ourselves a chance at the end.

Antetokounmpo, who also had seven assists, recorded his 35th double-double of the season.

After trailing by as many as 27, the Celtics outscored Milwaukee 36-22 to pull within 127-123 with 38 seconds to play. But Smart missed a 3-pointer and Middleton knocked down one of two free throws to seal the victory.

“Not enough, at least from the start," Walker said of his team's energy level. "As the game went along, we were a little better. But, games like this happen. We just have to be ready.”

Antetokounmpo scored the first basket of the night and the Bucks never trailed.

Milwaukee hit seven of its first 10 shots, including its first four attempts from 3, and led 36-20 after the first quarter. Brook Lopez had three of those 3-pointers and had 11 points in the opening quarter. Lopez finished with 16 points.

Milwaukee set a new season-high with 76 points in the first half. The Bucks had a 76-58 lead at the break.

Boston stormed out in the second half, cutting Milwaukee's lead to 87-81 with 5:16 left in the third. But the Bucks ended the quarter on a 19-6 run.

“I think the end of the third quarter was pretty big," Budenholzer said. "To finish the quarter up 19 was important because we needed all of that in the fourth quarter.”

Donte DiVincenzo had a career-high 19 points off the bench for Milwaukee.

Celtics: Boston entered the night having won five straight when trailing by at least 15 points after the first quarter dating back to Nov. 10, 2017. That streak, which was the longest such streak in NBA history, ended.

Gordon Hayward, who finished with seven points on 1-of-10 shooting for the Celtics, scored his only field goal on a 3 at the end of the third.

Jayson Tatum had 17 points and Daniel Theis added 12 points and 10 rebounds in the loss.

Celtics: Host the Suns on Saturday.

Bucks: At the Nets on Saturday.