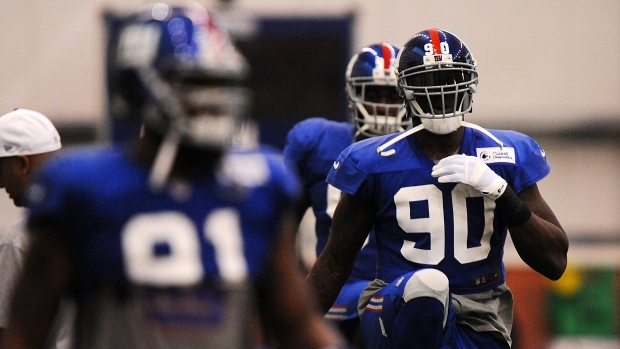 EAST RUTHERFORD, N.J. - The New York Giants are going to push Jason Pierre-Paul more in practice this week. There is a chance the two-time Pro Bowl defensive end will play for the first time since losing a finger in a July 4 fireworks accident.

Pierre Paul's stamina and his ability to play with a swollen right hand that lost an index finger will be tested in practice, coach Tom Coughlin said Monday.

If the 26-year-old makes enough progress, the Giants (4-4) would be open to using him against the Tampa Bay Buccaneers on Sunday.

"We'll have two good practice days with him and we will push the envelope a little bit to test the conditioning level," Coughlin said.

Pierre-Paul, who practiced with the team last week for the first time since being hurt, will get more snaps in practice, the coaches will continue to work with him individually, and there will be a chance for him to work on his timing.

What the Giants won't be able to simulate will be the hitting and physical nature of the game that players get in training camp.

The Giants also want to see what Pierre-Paul can do with his hand, which is swollen. The middle finger is balloon-like at the top, the joint of the thumb is swollen, as is the ring finger.

"If he practices and continues to advance in the way that he has over the last few days that he's been with us, if we feel good where he is physically after he goes through this, then that would be a decision that we would be confident in making," Coughlin said.

The Giants' defence needs some help. Drew Brees threw for 511 yards and a record-tying seven touchdowns in a 52-49 victory Sunday that saw the Saints average 8.1 yards on 76 offensive plays.

The unit had some excuses with starting linebackers Jon Beason and J.T. Thomas and cornerback Prince Amukamara all out with injuries.

Having Brees on top of his game obviously didn't help the defence, and neither did their failure to perform some of the basics. Coughlin said several times the players did not line up right and there were several miscommunications that made things easy for the Saints.

"So those are the things when issues arise, you've got to deal with them," Coughlin said. "So we will make sure those things get ironed out."

"I think what we did yesterday, we got away from the basics, the things that we do good, and you just have to go back to that and continue to build on that," Meriweather said.

Having Pierre-Paul back would help the defence, even if he was just to rush on passing plays. Brees threw 50 passes Sunday and was not sacked. He was hit only four times.

Meriweather was excited at the prospect of having Pierre-Paul in the lineup.

"Whenever you have a player like that, that impacts the game in so many ways, which gives other D-linemen one on ones, gives the quarterback the anticipation that he has to throw the ball a lot quicker than he does, so I'm excited," Meriweather said. "I just can't wait to see him play."

The positive for the Giants was that the offence played its best game of the season, getting a career-high six touchdown passes from Eli Manning, including three to Odell Beckham Jr.

The negative was the defence and the late punt return and face-mask penalty on Brad Wing that set up a winning field goal on the final play of the game.

"It's very important for everyone to understand we win and we lose as a team," Coughlin said. "There is none of this pointing the finger, there's none of that. I don't believe in that."

Manning said the defence has picked up the offence many times this season.

NOTES: Coughlin had no word on tight end Larry Donnell, who left the game with a neck injury. ...The coach also had no idea whether receiver Victor Cruz (calf) would return to practice this week. ... Amukamara is scheduled to have an MRI on his injured pectoral muscle.