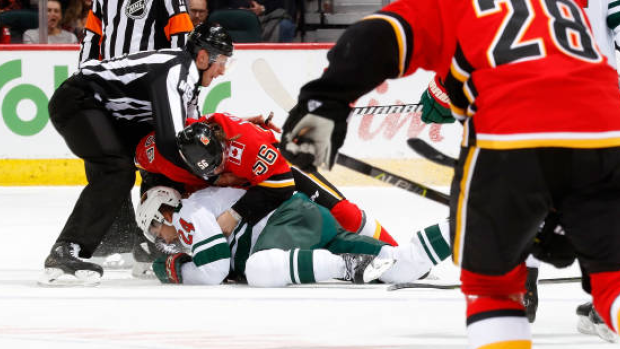 Calgary Flames defenceman Mark Giordano was suspended two games by the NHL's Department of Player Safety on Friday for a kneeing incident that occurred during Thursday's 2-0 win over the Minnesota Wild.

The Flames captain was assessed a tripping penalty after kneeing the Wild's Mikko Koivu in the third period.

Giordano will miss Saturday's home game against the Nashville Predators and Sunday's game in Edmonton versus the Oilers. The Flames top the Pacific Division at 18-9-2.

Calgary forward Ryan Lomberg also received a one-game suspension, on top of an automatic single-game ban announced earlier Friday, for a separate incident that occurred at the end of Thursday's game. Head coach Bill Peters was also fined US$10,000 in relation to the incident.

Lomberg left the bench on a line change and went after Matt Dumba after the Wild defenceman steamrolled Flames centre Mikael Backlund in the final minute of regulation.

Instigating in the final five minutes of the game resulted in Lomberg's automatic suspension and Peters' fine.

Backund will also sit out the two weekend games with an upper-body injury, Peters said Friday.