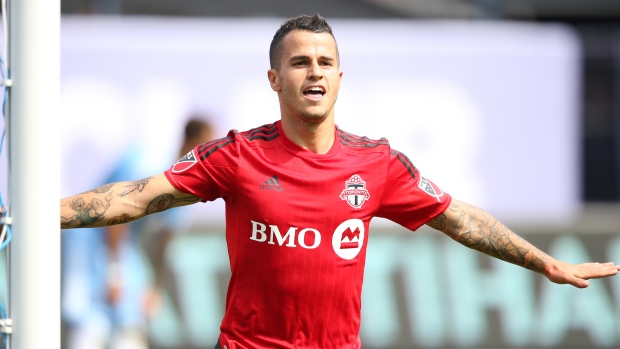 ROME - If Mario Balotelli wants to return to Italy's squad, coach Antonio Conte says he'll have to show that he deserves a spot.

Andrea Pirlo and Sebastian Giovinco, meanwhile, will be called up to the national team for European Championship qualifiers against Malta and Bulgaria next week, after their recent moves to MLS.

Balotelli hasn't played for Italy since the Azzurri were eliminated in the first round of last year's World Cup. On Thursday, he was loaned back to AC Milan after scoring only one goal in the Premier League for Liverpool last season.

"The doors to the national team are not closed for anyone. But you have to deserve to be part of this team, via performances, behaviour and moral aspects which we believe a lot in," Conte said Friday.

Balotelli was called up once last year by Conte but then was injured and sent home.

"It's up to Balotelli to deserve an eventual return," Conte added.

Conte will name his squad on Saturday. The Azzurri sit second in Group H, two points behind Croatia.

Giovinco moved to Toronto FC in January and is among the league leaders with 17 goals in 24 matches.

"Giovinco is doing very well in Canada. He's returning to be the player we knew and he can be an important part of this team," Conte said. "And Pirlo will be in there, too. I think he's still a key player for us, and as long as he holds up and makes a difference on the pitch he'll be with us."