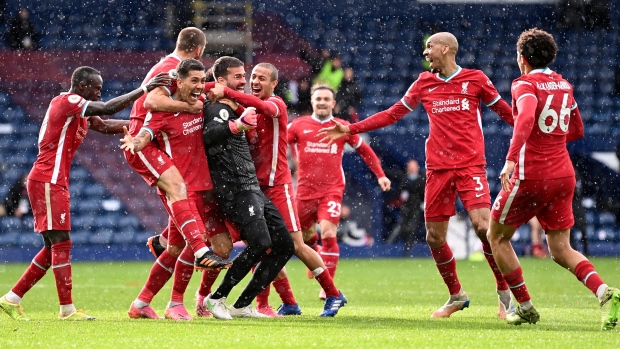 WEST BROMWICH, England (AP) — Liverpool goalkeeper Alisson Becker scored a dramatic goal in the fifth minute of stoppage time to earn a 2-1 win over West Bromwich Albion in the Premier League on Sunday and keep alive his team's realistic chances of qualifying for the Champions League.

Alisson came up for a corner and, unmarked, glanced home a header from Trent Alexander-Arnold's cross before getting mobbed by teammates.

The Brazil international is the sixth goalkeeper to have scored a goal in Premier League history, the first with a header. None of the previous five was a winning goal.

No Liverpool goalkeeper had previously scored a competitive goal.

“I saw it coming — I just tried to be in a good position to try to help my team,” Alisson said.

"Nobody follows me. I was lucky and blessed. Nobody can explain these types of things.”

The 28-year-old Alisson said it was the first time in his career that he had scored a goal.

It was delivered with perfect technique, too.

“What a goal, what a worldie, an unbelievable goal,” Liverpool manager Jurgen Klopp said. “It couldn’t have been a better moment, it’s just perfect for today. If he is never doing it again, I’m fine. it’s a perfect moment."

Mohamed Salah’s 33rd-minute goal for Liverpool — his 22nd of the campaign, tying for the most with Tottenham's Harry Kane — had canceled out the opener by Hal Robson-Kanu in the 15th at The Hawthorns.

Liverpool is in fifth place on 63 points, with games remaining against Burnley and Crystal Palace. Fourth-place Chelsea has 64 points and third-place Leicester has 66, and both also have two games left.

Leicester and Chelsea meet on Tuesday so one of them, if not both, will drop points.

Chelsea finishes the season away to Aston Villa and Leicester hosts Tottenham.