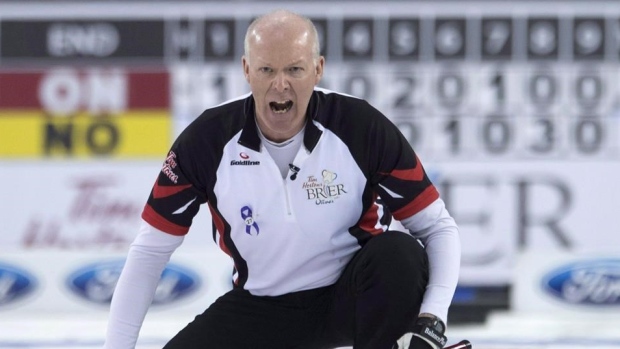 Curling legend Glenn Howard still has plenty to offer on the pebbled ice.

The 59-year-old and his Penetanguishene, Ont., rink of third (and son) Scott Howard, second David Mathers and lead Tim March won the Oakville Fall Classic Sunday in their first event of the 2021-22 curling season.

A nice “W” to start the season! Thanks for the great weekend @OakvilleCurling , see you again for the next one in just a few days! 🥇 https://t.co/gCmLxu5dfF

In the final against Tanner Hogan, who was filling in for Jonathan Beuk this weekend, Team Howard put up a four-spot with hammer in the opening end en route to an easy 6-2 victory after just four ends.

Howard lost his first game of the week against Mark Kean, but proceeded to reel off six straight to capture the title which had total purse of $6,000 and $2,000 to the winning rink.

Sinclair and her rink of third Monica Walker, second Cora Farrell and lead Elizabeth Cousins held a 3-0 lead after two ends before giving up a deuce and then a steal of two to go down by a single point. After a blank in the fifth end, Sinclair grabbed three in the sixth before Birt came back with a pair in the seventh. Tied 6-6 in the eighth and final end, Sinclair put up a two-spot with hammer to take the title.

Team Sinclair went a perfect 6-0, including a 5-4 win over Quebec's Team Laurie St-Georges in the semifinals. Team St-Georges made headlines across curling last winter thanks to their strong play at their rookie Scotties Tournament of Hearts.

Team Howard are coming off a tremendous run at last year's Tim Hortons Brier even though they had their skipper sitting on the sidelines with an injury. Howard was out following a snowmobile accident, but had good buddy and former teammate Wayne Middaugh fill in at the skip position inside the Calgary bubble. Middaugh, who had been away from the pro curling scene for years following a skiing accident of his own, put together an inspirational and nostalgic week, leading Team Howard all the way to the championship pool, just missing out on the final four.

If Howard's crew can find a way to get to that level once again this season, the four-time Canadian and world champion might be able to qualify for the Canadian Olympic Trials slated to run from Nov. 20-28, 2021 in Saskatoon, Sask.

At the Curve US Open of Curling, Kim Rhyme defeated Rachel Workin in the women's final, 5-1, while Scott Dunnam scored a deuce in the extra end to edge Greg Persinger, 8-6, in the men's final.

As for the two person game, Abby Marks and Marc Kennedy won the Leduc event on the Alberta Curling Series by beating Sarah Wilkes and Bradley Thiessen, 7-3, in the final on Sunday.

A three-spot in the seventh end was the difference.

Kennedy and Marks also defeated Calgary's Brittany Tran and Aaron Sluchinski in the semis as well as Kayla Skrlik and Jeremy Harty in the quarters.

Perennial contenders Laura Walker and Kirk Muyres were ousted in the quarterfinal round.