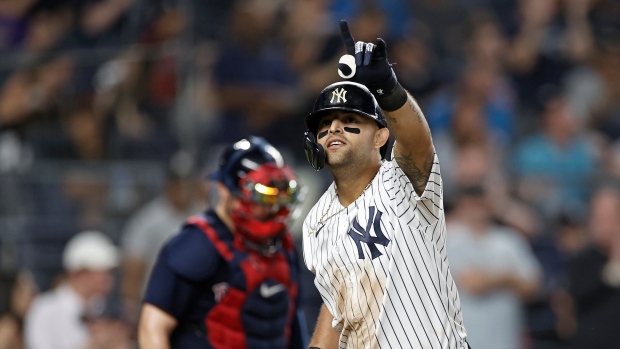 That was the New York Yankees' starting outfield Sunday night for a critical game against rival Boston.

Not exactly the Bronx Bombers of Mantle, Maris and Berra. But not to be taken lightly, either.

Gleyber Torres, Rougned Odor and LaMarre homered to back another strong start from Jameson Taillon as the depleted Yankees pulled away for a 9-1 victory over the scuffling Red Sox.

Playing without All-Star slugger Aaron Judge and five of his teammates who also tested positive for COVID-19 recently, the Yankees took their second straight from Boston after dropping the first seven meetings this year.

“It would have been easy for us to roll over after everything that’s happened,” Taillon said.

Taillon (5-4) pitched 5 1/3 scoreless innings in his 100th major league start, improving to 4-0 in his past five outings. Chad Green escaped a jam in the sixth to protect a three-run cushion.

New York won two of three in a series originally set for four games before Thursday's scheduled opener was postponed for testing and contact tracing.

Boston, which has lost six of eight overall, left town with a half-game lead in the AL East over Tampa Bay, and seven in front of the fourth-place Yankees.

DJ LeMahieu extended his on-base streak to 30 games, longest in the big leagues this season, with a single that set up a third-inning run for New York.

LaMarre, just called up from the minors, added a two-run homer in the eighth — his first with the Yankees and first in the majors since September 2019.

“It's kind of weird not seeing certain guys' faces around here, but we have a good environment in there,” Taillon said.

Torres hit his fifth homer on an 0-2 pitch from Martín Pérez (7-6) leading off the second. Torres also homered his last time up Saturday night in a 3-1 victory that was called after six innings because of heavy rain. That gave him long balls in consecutive games for the first time since a three-game streak in June 2019.

Odor reached on a bunt single leading off the fifth and scored on Allen's sacrifice fly. He added a two-run homer to make it 5-0 in a four-run seventh that featured five walks, including three in a row — two with the bases loaded.

“I think we’re OK,” Pérez said. “We’re one of the best teams in the big leagues.”

There was no visible trouble between Red Sox players and unruly fans, one night after Boston left fielder Alex Verdugo was hit by a baseball thrown from the Yankee Stadium stands. The fan who threw the ball was banned for life from attending big league games.

Struggling closer Aroldis Chapman worked a 1-2-3 ninth after his first pitch sailed to the backstop. Yankees manager Aaron Boone said he would have called on Chapman in a save situation, too.

Red Sox: 1B Christian Arroyo strained his left hamstring when he went into a split stretching for a throw and is most likely headed to the injured list, Cora said. It was the first career appearance at first base for Arroyo, who was replaced by Bobby Dalbec. ... OF/1B Danny Santana (left quadriceps strain) is expected to come off the injured list Monday. ... All-Star SS Xander Bogaerts doubled twice after sitting out Saturday night with a sore left wrist. He was lifted for a pinch-hitter in the eighth with Boston trailing 7-0.

Yankees: RHP Luis Severino threw 30 pitches to hitters, simulating two innings. “I thought he threw the ball really well. Looks strong, healthy,” Boone said. Severino will likely face hitters again in five or six days before potentially beginning another minor league rehab assignment. He hasn't pitched in the majors since 2019 after having Tommy John surgery, and his return was slowed because of a groin injured sustained June 12 in a rehab outing. ... Boone said RHP Darren O'Day's season is likely over due to a left hamstring injury. ... Boone said all six Yankees players who recently tested positive for the coronavirus are doing pretty well as far as symptoms are concerned. RHP Jonathan Loaisiga, one of those players on the COVID-19 injured list, was expected to fly to New York and rejoin the team by Tuesday. ... RHP Michael King (bruised right middle finger) still feels discomfort and won't throw for another five to seven days. ... Amburgey exited after four innings with a right hamstring cramp and was replaced in the lineup by Brett Gardner.

A leaping LaMarre hit the right field wall with a loud thud trying to catch Christian Vázquez's fifth-inning double and was shaken up. He was checked by Boone and two athletic trainers, but remained in the game.

“I told Boonie, `I’m not coming out,'” LaMarre said. “You don’t get too many chances to wear pinstripes.”

LaMarre was called up from Triple-A before the game to replace outfielder Tim Locastro, put on the 10-day injured list with a torn right ACL.