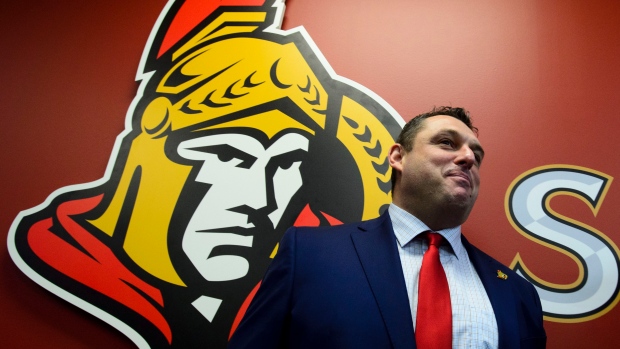 Shortly after the Toronto Maple Leafs were eliminated by the Boston Bruins in Game 7 of their playoff series last month, D.J. Smith went to work breaking down game tape.

But the Toronto Maple Leafs assistant coach wasn’t analyzing film from his team’s playoff loss to the Boston Bruins. Instead, the 42-year-old was breaking down tape from their divisional rival – the Ottawa Senators – knowing that he could end up as a legitimate candidate for the club’s head coaching vacancy.

“When our season ended, I kind of had an eye that maybe I would get interviewed, so I started watching tape. So I was ready for this,” Smith told TSN 1200 on Thursday.

Sure enough, Pierre Dorion contacted him earlier this month for an interview and Smith knew his main priority was to be the most prepared candidate for the job.

“I wanted to make sure I was ultra-prepared going in there. As a guy trying to be a first time head coach, you had better check all the boxes before going into an interview,” added Smith. “There’s no reason for me to not know something. I had nothing but time to get ready.”

Smith poured over game tape from 20 different Ottawa Senators games from the 2018-19 season, looking for any patterns or clues as to why the club surrendered a staggering league-worst 302 goals.

“I took an entire analytics breakdown of the Ottawa Senators from last season and, from there, I picked games at the start of the year, middle of the year and the end of the year. Eventually, if you watch enough you’re going to see the same things happen over and over. And these are the things you want to fix.”

Dorion and assistant general manager Peter MacTavish were thoroughly impressed with Smith’s intimate knowledge of the Senators strengths and weaknesses while they were watching film together during an initial interview that lasted approximately seven hours. Dorion and MacTavish walked away from that meeting with the sense that Smith was the gold standard for the interviewing process and that the other six candidates for the job – which included such big names as Patrick Roy and Jacques Martin – would all be measured against Smith’s in-person performance.

And in the end, nobody could hold a candle to Smith.

“It wasn’t an easy decision, there were seven guys who could have had this job,” admitted Dorion, who phoned the other six candidates to inform them of his decision on Wednesday. “But at the end of the day, we went with what we felt was the best decision and I went with my gut and D.J. Smith was our choice.”

Dorion informed owner Eugene Melnyk of his decision to hire Smith on Wednesday morning and then contacted his new head coach with a phone call. Smith admitted that his heart would skip a beat each time his phone rang and Dorion’s name came up on the caller ID in the past couple of weeks.

Predictably, there was a portion of the fan base that did not share Dorion’s unabashed enthusiasm, accusing the Senators of selecting Smith because he was the cheapest option available – considering he didn’t boast the same NHL resume as the likes of Roy, Martin, Marc Crawford or Rick Bowness. But Dorion bristled at the notion that the club’s finances played any role in the hiring of his new head coach.

“No impact at all,” Dorion said firmly when asked about a correlation between the team’s internal budget and the hiring of Smith. “He could have been $10 million a year, he could be working for one dollar – no impact. I say that with as much certainty as anything I’ve ever told you. He’s the right man for this job and he’s getting paid very well for this job.”

However, the analytics-obsessed portion of the Senators fan base should be satiated by Smith’s willingness to embrace that side of the game.

“I saw the areas that I believe I can fix. The numbers showed exactly what areas need to be fixed and the tape showed the exact same thing,” Smith added. “I’m going to use every tool that’s going to help us win hockey games. With analytics it just helps you double check or triple check that you’re doing the right thing. Those numbers to me are going to help.”

The Senators parted ways with Guy Boucher as their head coach with about six weeks to go in the 2018-19 campaign. Marc Crawford guided the club to a 7-10-1 finish in his 18 games behind the bench, but was informed on Thursday that the club was going in a different direction. Dorion admitted he was almost at a loss for words when speaking to Crawford on Thursday morning, thanking him for his three years of service with the club. But it’s clear the organization desperately needed a fresh voice and face to start the next phase of their rebuild and felt that Smith’s personality was the ideal fit.

“I’m going to build trust and accountability. I’m going to be the most positive person they’ve seen in a long time. We’re going to make this thing fun,” added Smith. “There are a lot of long days, but every day in the NHL is a good day to me.”

Smith spent the last four seasons as an assistant with Mike Babcock’s staff in Toronto. Prior to that, he built an OHL powerhouse with the Oshawa Generals – compiling a 135-53-3-13 record in three seasons which culminated with a Memorial Cup championship in 2015. He said his philosophy as a first-time NHL head coach won’t deviate too much from what he’s done in the past.

“You can ask any of my players, I push guys really hard, but at the same point I always had their back. I’m not going to change anything that helped me get here,” he said.

Smith plans to move to Ottawa this summer with his wife – broadcaster Christie Bezaire – and their soon-to-be three-year-old son. The Sens new head coach admitted that he leaned on his wife’s broadcasting experience before meeting with reporters in Thursday’s press conference in Ottawa.

“She’s really good at that. I hadn’t really talked to the media since I won the Memorial Cup with Oshawa, so I hadn’t talked in a quite a while so it was good to get some advice,” he added.

His 15-year-old son Colton likely won’t accompany the family to Ottawa, as he is focusing on potentially being drafted into the OHL next year. He will stay in the Windsor area and play with the Sun County Panthers in his midget season while his dad coaches the Senators.

But Smith said that he will lean on his own experiences of trying to connect with his teenage son as he embarks on new relationships with Senators players who are not that much older than Colton.