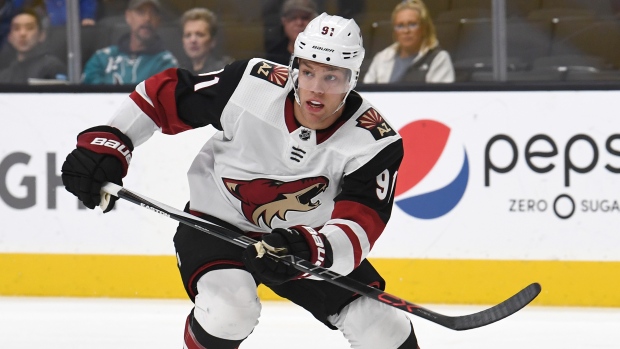 The Arizona Coyotes and Taylor Hall have had discussions on a potential contract extension, general manager John Chayka told The Athletic.

Chayka noted that the two sides initially planned to hold off talks until the off-season, but with the season currently paused, a window for discussions may be open. He added, however, that he has not exchanged numbers on a contract with Hall's agent Darren Ferris.

"I have shared some calls with Darren. I think we’re both just trying to get our head wrapped around this scenario here and how it affects the Coyotes; how it potentially affects Taylor. It’s unique," Chayka said. "I don’t have an answer for you other than to say, no, we haven’t exchanged numbers or anything like that.

"Obviously, our intent was always to get through the season and not having any conflict with Taylor’s play. This leaves us in a bit of a limbo where it’s obviously not technically the end of the season, but it also wouldn’t conflict with his play to talk. All I would say right now is that both sides are gathering information and having some discussions. Where that goes, I’m not entirely sure today. As we talk, we’ll see where things go."

The Coyotes acquired Hall and forward Blake Speers in December from the New Jersey Devils for a 2020 top-three protected first-round pick, a 2020 conditional third-round pick, as well as prospects Kevin Bahl, Nick Merkley and Nate Schnarr.

Hall is scheduled to become an unrestricted free agent as he plays out the final season of a seven-year deal signed with the Edmonton Oilers in 2012. He carries a $3 million cap hit for the remainder of the season, with the Devils retaining half of his $6 million salary.

The 28-year-old was limited to 33 games last season due to a knee injury, posting 11 goals and 37 points. He won the Hart Trophy in 2018 after scoring a career-high 39 goals and 93 points in 76 games and leading the Devils to a playoff berth. He posted 41 points more than the team’s next leading scorer that season.

Arizona sat four points back of the Nashville Predators for the final wild-card spot in the Western Conference when the NHL season was paused.