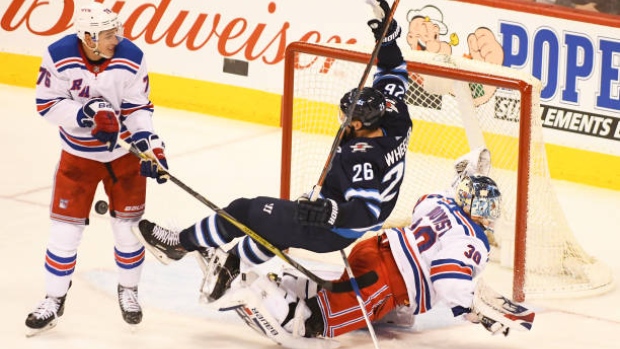 With the playoffs just around the corner, they might wind up getting both.

The league announced Tuesday that GMs want the final decision on video reviews of goalie interference to rest with the hockey operations department in Toronto instead of referees on the ice.

"We had to first define the standard of review and get more clarity on that," Vegas Golden Knights GM George McPhee said. "We have that now, and then to have that decision made in Toronto, I think affords more consistency."

The ball now rests in the NHL Players' Association's court, and then ultimately with the board of governors, which requires unanimous support from all 31 teams to approve an in-season change of this sort.

On-ice officials, using a tablet and headset, currently make the final video review determination in conjunction with hockey operations when a coach challenges for goalie interference.

But a couple of controversial decisions made in the heat of the moment involving high-profile teams and players forced the league to take a second look at the process.

The NHL laid out the numbers to GMs and reporters this week, stating that through 1,114 games in 2017-18, there were 170 combined challenges from coaches and the situation room for goalie interference.

Of those instances, referees stayed with the call on the ice 119 times and overturned the initial ruling on 51 occasions. The league said it only disagreed with a fraction of the calls made by its officials.

"I have 100 per cent confidence in how things are working right now, but I think there's always an appetite to look, to see if there's a way of maybe improving," Winnipeg Jets GM Kevin Cheveldayoff said. "What can never be lost is that this ultimately will still be a judgement call."

One idea floated at the Boca Beach Club resort is to have a former referee added to the group that makes decisions on interference in the situation room, but NHL senior executive vice-president of hockey operations Colin Campbell cautioned the subjective nature of calls means there will always be anger one side.

"They just don't like the answer so it doesn't matter who you put in there. What I'm hearing from the managers is they want consistency."

One thing the GMs gave a thumbs down to by a vote of 21-10 was moving ahead with a change to the offside rule that would have seen a trailing skate blade off the ice, but above the blue line, considered onside.

Managers decided ahead of this season to assess a two-minute penalty when a coach incorrectly challenges for offside in hopes of removing what were seen as sometimes frivolous attempts to slow down play.

"I'm fine with the status quo," Cheveldayoff said. "I would like to continue the evaluation of the implementation of the penalty. That has really decreased number of challenges, and the opportunity is still there to (rectify) the egregious one.

"There's always this law of unintended consequences that can come into play. In a short period of time you can make a decision that can have long-term effects. We made this decision last year and I think it's been a good one."

George Parros, the head of the NHL's department of player safety, also made a presentation Tuesday that touched on trends in the game.

The former tough guy focused on boarding, which has seen six combined suspensions in 2017-18, and interference, which has become more of a problem as the season has worn on than the direct hits to the head that dominated these meetings not that long ago.

"Particularly with boarding, we're seeing more younger players these days that turn their backs to the play at the last second," Parros said. "Those are the tough ones to determine where the fault lies. If the player can essentially get out of the way before making contact before seeing the numbers, we take that into consideration."

As for hits to the head, Parros, who is in his first season in the role, said it seems players have adapted.

"When you think about it where this department has come from this very inception, that was the big concern," he said. "You used to see a lot of guys head-hunting.

"Now we keep shifting the microscope to different aspects of the game and smaller, less impactful elements. Checks to the head are down, which is great."