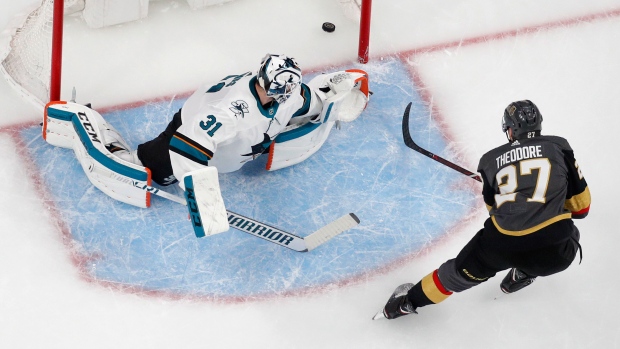 The Vegas Golden Knights are on the brink of reaching the second round for the second time in their two-year history.

A year after advancing all the way to the Stanley Cup Final in their inaugural season, the Golden Knights are one win away from moving past the San Jose Sharks in the post-season again as the teams head into Game 5 on Thursday night.

After losing the series opener at San Jose, Vegas has won three straight and will be looking to close it out back on the Sharks' home ice. The Golden Knights know it won't be easy, though.

"They're a team that's not going to roll over and quit," Vegas' Max Pacioretty said. "They're going to play physical. .... We know that right from the start they're going to give it their all. We got to be ready for that and try to match that intensity."

Veteran goalie Marc-Andre Fleury, who got his 15th post-season shutout in Vegas' 5-0 win at home in Game 4 on Tuesday night, also isn't taking anything for granted.

"It's not over obviously," he said "One game at a time. ... They're a good team, they're dangerous. We just got to go in, focus on our game. Focus on the first period, nothing too far ahead. Just focus on playing the right way in the first and get it going for the second and not worry about the result."

After a 5-2 loss in the opener, the Golden Knights — who beat San Jose in six games in the second round last year — have outscored the Sharks 16-6 in the last three games. That includes a 13-3 margin after the first period of Game 2.

Martin Jones, who has started each game of this series and will be back out there for Game 5, has given up 11 goals on 54 shots over the last three games. Aaron Dell, who replaced him during Games 2 and 4, hasn't fared much better while giving up five goals on 36 shots.

On the other end, Fleury has stopped 78 of 81 shots over the last eight periods.

The Golden Knights have gotten off to fast starts in each of their wins, scoring within the first 75 minutes. They're also 5 for 18 on the power play in that stretch — including 2 for 9 in Game 4 — a marked improvement from the regular season, when they were 25th in the league at 16.8%.

The Sharks know they'll need to avoid taking penalties to have a chance to extend the series.