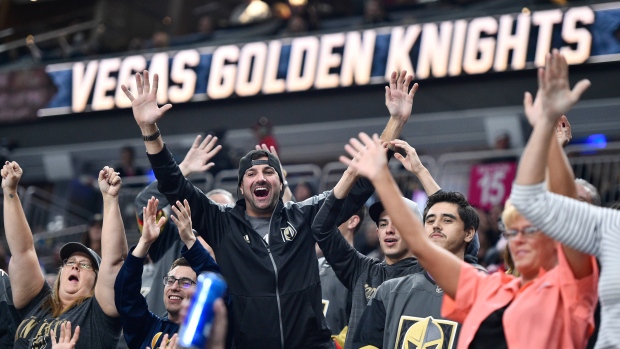 LAS VEGAS — The addition of the Vegas Golden Knights not only provided each of the NHL’s 30 clubs with a $16 million expansion fee cheque, but the revenue they have pumped into the league will help deliver the largest salary cap increase since 2014.

Even if the NHL and NHL Players’ Association decide not to enact an inflator, that means the salary cap will rise at least $3 million from this season’s $75 million.

Teams could find themselves with upwards of $7 million to play with this summer.

That’s music to the ears of new Maple Leafs general manager Kyle Dubas - and the rest of the league’s cap-strapped teams - who could use a little more breathing room.

“It depends on where the Players’ Association wants to be and where we end up being in terms of that discussion,” Daly said.

The NHL’s salary cap has risen an average of just $2 million per season over each of the last three summers, with revenue remaining mostly flat.

League-wide revenue is approaching $5 billion per season. The success of not just the Vegas franchise, but also a 31st team in general, has helped.

“There’s a lot of revenue certainly generated by the Las Vegas franchise,” Daly said. “Certainly on their jersey sales and licensed merchandise, it’s off the charts. It continues to be off the charts. It’s an amazing story in every category.”

The Golden Knights literally cannot print merchandise fast enough, with suppliers working around the clock to produce more and more as lines at their retail store here snake into the desert sun outside.

Daly said the Golden Knights rank inside the Top 10 in the NHL in terms of per-game game revenue. In a gate revenue-driven league, that is an enormous boon.

“They generate very strong gate here,” Daly said. “They generate strong local revenues. Obviously their local media rights deal isn’t as strong as a lot of other teams. I would say that is a primary revenue generator for a lot of our clubs. I can’t really rank them within the 31 clubs, but certainly the fans have wanted to come see the games here and that’s been good for the franchise.”

PLAYOFF FORMAT: The NHL’s agreement with the NHLPA on the current playoff format expires at the end of June, but next season is locked in with the same format as used this year and the past three years.

There does appear to be a small appetite for change among players and some coaches and general managers who grumble, particularly after the No. 1 and No. 2 regular season teams clashed in the second round with Nashville and Winnipeg.

There is less of an appetite for change from the NHL’s perspective.

“We’ve taken a look at it very thoroughly and it’s something that we’re going to discuss with the Players’ Association,” Daly said. “We think from a revenue standpoint, this current playoff format has been better than any playoff format we’ve ever had before.”

SEATTLE UPDATE: Commissioner Gary Bettman vehemently denied a report that the Seattle expansion bid will receive conditional approval at the June 20 Board of Governors meeting.

“That is absolutely not true,” Bettman said.

The Seattle ownership group, led by the Oak View Group and David Bonderman, reached the cap for 30,000 season-ticket deposits in an hour in March.

Bettman said there is no timetable in place, but a vote could come as soon as this fall or winter. The Key Arena renovation has not yet begun and will take two years to complete.

“There are a number of bases we have to touch, a lot of due diligence that has to be done, a lot of interaction with the prospective ownership group,” Bettman said. “So we think we’re on target.”

Bettman and Daly both said they received no pushback from team owners about the success of the Golden Knights stemming from the expansion draft rules. The NHL has already announced that any potential Seattle-based team will have the same exact rules for the draft, as agreed upon in their expansion application.

Daly confirmed Monday that the Golden Knights would be exempt from participation in the Seattle expansion draft, when and if that occurs.