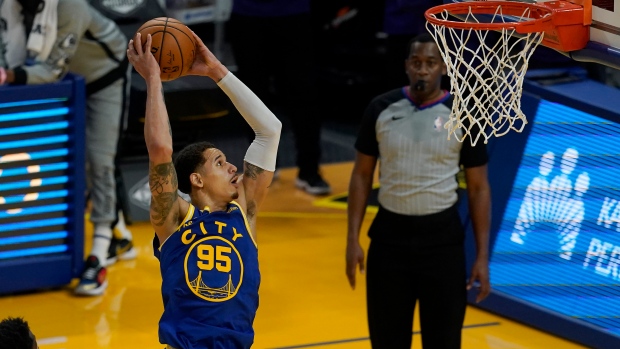 SAN FRANCISCO (AP) — The Golden State Warriors signed forward Juan Toscano-Anderson to a multiyear deal Thursday and forward Jordan Bell to a two-way contract for the remainder of the 2020-21 season.

Toscano-Anderson originally signed a two-way contact with the Warriors in December. He is averaging 5.5 points, 4.3 rebounds and 2.7 assists in 55 games this season. The Oakland native has scored in double-figures 10 times, including a career-high 20-point performance on April 15 at Cleveland.

Bell is back for a second stint with the Warriors after spending the 2017-18 and 2018-19 seasons with Golden State. He most recently signed a 10-day contract with the Washington Wizards at the end of April and appeared in five games, scoring 14 points and grabbing 19 rebounds.

Bell is averaging 3.7 points and 3.1 rebounds in 159 career games with the Warriors, Minnesota, Memphis and Washington.