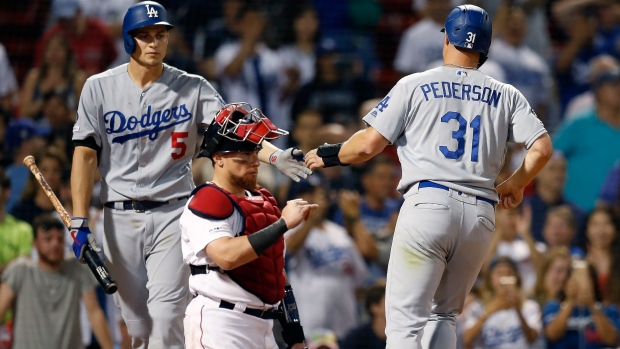 Max Muncy drew a bases-loaded walk and Alex Verdugo had an RBI single during a three-run 12th inning, and the Los Angeles Dodgers beat the Boston Red Sox 7-4 early Monday morning in another late-night showdown of last year's pennant winners.

After playing 18 innings spanning 7 hours, 20 minutes in the third game of last year's Series, the teams needed 5:40 to decide this series finale. It was Los Angeles' third win in 14 tries (including World Series games) at Fenway Park.

"It was a grinder," Dodgers manager Dave Roberts said. "You could see the way those guys played with their intensity and focus that they wanted this series. I thought it was very focused baseball and two equal ballclubs."

After avoiding the rematch talk most of the weekend, Roberts smiled and said: "I think we were just fortunate that (Nathan) Eovaldi wasn't in the building. Once I knew that he wasn't active, I felt a little bit better."

"We know them pretty well from playing them in the World Series last year," Dodgers infielder Justin Turner said. "It's good to get a series from them."

Boosted by a large and loud contingent of Dodgers fans that were heard the entire weekend, Los Angeles took the final two of a three-game set against the defending champs and sent Boston to its first interleague series loss in Fenway since losing to the Chicago Cubs in 2014.

Boston rallied with back-to-back homers from Xander Bogaerts and J.D. Martinez in the eighth against Pedro Báez but then stranded seven runners over the final four innings.

"Just one of those that we had our chances, we didn't take advantage of it, and then at the end they did what they did and scored some runs," Boston manager Alex Cora said.

Los Angeles' Joc Pederson opened the 12th with a walk against Hector Velázquez (1-4), and Cody Bellinger was awarded first base by the umpires when he collided with the pitcher as he was running down the line after first baseman Brock Holt bobbled his grounder. A.J. Pollock singled before Muncy drew his go-ahead walk. Verdugo then singled, making it 6-4. A third run came on Russell Martin's fielder's choice.

Pollock hit a short three-run homer down the right field line in the first inning against David Price and added an RBI single.

Wearing a small paw print on his cap in honour of his dog Astro, who died during the All-Star break, Price gave up four runs, one earned, in five innings, allowing four hits, striking out seven and walking three on a season-high 113 pitches.

"Whenever I have the opportunity to put somebody away, I haven't been able to do that the past two or three weeks, and it's really driven the pitch count up," Price said.

Pollock's homer sliced into the first row — estimated at 326 feet — just beyond the Pesky Pole. He was smiling rounding second, maybe about the short distance it travelled.

Boston scored twice in the first with three infield singles to short mixed into the five singles. Benintendi beat out a bases-loaded grounder that shortstop Chris Taylor made a diving stop on, and Bogaerts, originally on second, raced home for the second run when Taylor's throw bounced past first.

Dodgers: Roberts rested SS Corey Seager until he pinch hit in the 11th inning and stayed in. Roberts said he's planning on playing him the next three days in Philadelphia. ... Taylor was hit near the left wrist by a fastball by Heath Hembree and came out in the 12th. Roberts said he had X-Rays that were negative.

Red Sox: Placed knuckleballer Steven Wright on the 10-day injured list a day after he was hit on the right foot by Muncy's liner and added Andrew Cashner, acquired from Baltimore on Saturday for two minor leaguers, to the roster. ... 1B Mitch Moreland (strained right quadriceps) worked out and got treatment with the team.