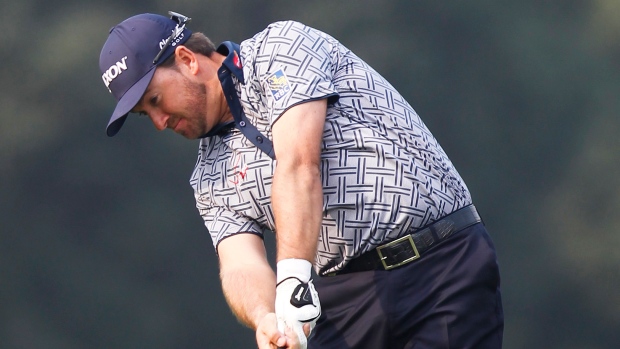 KING ABDULLAH ECONOMIC CITY, Saudi Arabia — Six years after combining brilliantly for Europe in the Ryder Cup, Graeme McDowell and Victor Dubuisson will play together in the final group at the Saudi International on Sunday.

McDowell birdied four of his last seven holes -- including the 18th -- to shoot 4-under 66 in the third round and claim a one-stroke lead on 12-under 198 overall at Royal Greens Golf and Country Club on Saturday.

Dubuisson is the nearest challenger after a 65, with the Frenchman showing an unexpected return to form after years in the doldrums.

Dubuisson and McDowell were paired at the 2014 Ryder Cup at Gleneagles by Europe captain Paul McGinley, winning both of their foursomes matches and then gaining 1 1/2 points between them in the singles to help set up a big win for the Europeans.

McDowell’s career also has had a dip since that Ryder Cup, with his victory at the Corales Puntacana Resort & Club Championship in March 2019 being his first title in 3 1/2 years. He tied for fourth place at the Sony Open in Hawaii last month.

“I shared a car up to the course this morning with Victor and I was chatting with him and I always look out for him," McDowell said. "I had great experiences with him in 2014 at Gleneagles.

"He's such a great guy. He hasn't had the best form the last few years and I'm really, really happy to see him at the top of the leaderboard and looking forward to being with him tomorrow. It's going to be tough to try and play tough against him, but we're both competitors.”

Gavin Green of Malaysia was three strokes off the lead on 9 under overall after shooting even-par 70.

Defending champion Dustin Johnson (68) and second-round leader Victor Perez (73) were in a three-way share of fourth place, a further two strokes back.

Brooks Koepka and Phil Mickelson were other big names at the tournament despite criticism of the tour coming to a country with its record of human-rights violations. They were in a tie for seventh place, six strokes behind McDowell, after Koepka shot 65 and Mickelson shot 68.