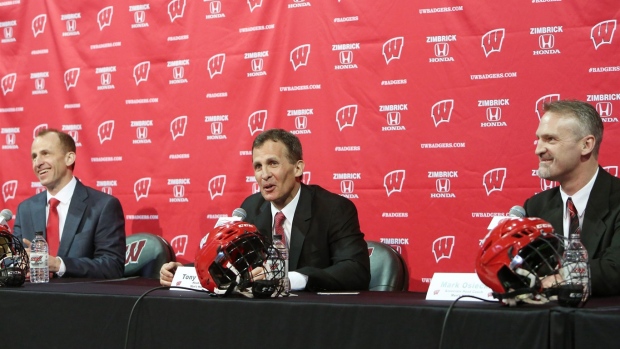 PLYMOUTH, Mich. — Tony Granato was honoured to get a call, offering him a chance to coach the U.S. men's hockey team at the 2018 Olympics, the first without NHL players since 1994.

When the Wisconsin coach heard and read some of the players he may lead in South Korea, he got even more fired up.

"There are a lot of attractive players," Granato said Friday. "Unless you analyzed the pool, you wouldn't know the calibre of guys that are out there that can help us contend for a medal."

USA Hockey named Jim Johannson, who has been a player and in management the previous six Olympics, will be general manager of the team that will be without many well-known names outside of hockey circles. Johannson expects at least half of the roster to include players from European professional leagues while the rest of the team is comprised of prospects with minor league contracts with NHL teams and college stars.

Granato, a former NHL forward, was an assistant at the 2014 Olympics under Dan Bylsma. He knows USA Hockey could have chosen to give Bylsma or Ron Wilson another chance to coach the Americans at the Olympics.

"There were a lot of great candidates," Granato said. "The relationship I have with the assistants is important because we're not going to have much of a grace period to get on the same page."

Johannson said he has talked to 80 to 90 potential players, including one who may retire from the NHL, to let them know they need to be on a list with the U.S. Anti-Doping Agency if they want to be eligible to be chosen. He will be assisted by Ben Smith, the team's director of player personnel.

The players getting an opportunity to play in the next Olympics in six months would not have been in the pool of prospects if the NHL chose to take an Olympic break as it did every four years from 1998 to 2014.

"I can't tell you the excitement that is coming through the phone," Johannson said, adding he expects to field calls from a lot of other players. "There's going to be 25 great stories."

The Deutschland Cup this fall in Germany will give nearly 30 Americans playing professional in Europe an opportunity to secure spots on the 25-man roster.

After that tournament, USA Hockey will begin building a roster that will later include AHL players without two-way contracts with NHL teams and college standouts. Granato will step away from his duties at Wisconsin to coach in Germany and South Korea, leading to him missing about four games with the Badgers.