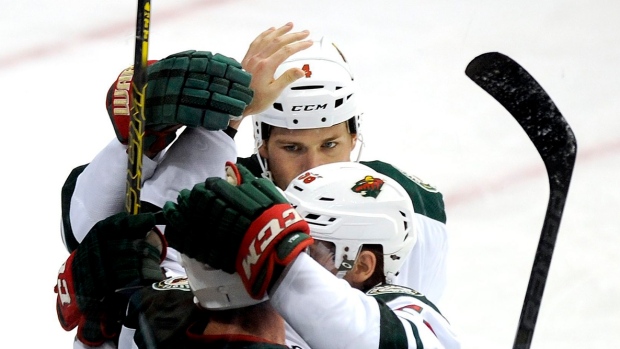 DALLAS - After struggling recently, Minnesota Wild goalie Darcy Kuemper wanted a chance to help the team get a win.

He had lost two games in a row. Then he was pulled after giving up two goals on two shots on Thursday.

But he came back to make 27 saves in Minnesota's 2-1 victory over the Dallas Stars.

"If you want to be the man, then you have to get in there and perform well after a night when things really haven't gone too well," Wild coach Mike Yeo said. "So really pleased with that.

"The one save that stuck out to me was early in the third period when (Jamie) Benn got that shot off in the slot. That could've completely changed the complexion of the game."

Dallas goalie Kari Lehtonen had stopped Charlie Coyle's shot from the top of the right circle, but Granlund beat the goalie to the puck to put in the rebound.

Kuemper allowed only a second-period goal by Antoine Roussel.

"We did a good job defending," Kuemper said. "Great box-outs allowed me to see it."

"They must have blocked 30 shots. They did an incredibly good job of being in our shot lane. They got the saves when they needed them and they blocked the shots they needed to block."

The Wild actually had 28 blocks, led by Jared Spurgeon's seven.

Minnesota won its second straight game after a four-game losing streak. The Wild won for just the second time in the past 21 games in Dallas dating back to 2003.

The Stars' problems at home continued. They have lost six straight (0-4-2) and are 1-4-4 on home ice this season. In all six of those losses, they gave up the winning goal in the third period or overtime.

"The last two games have been a lot better when it comes to cleaning up the game," Ruff said. "These are the type of games we'll win at home if we keep playing like this."

Dallas dominated the early play. The Wild didn't have a shot on goal until 9 1/2 minutes into the game, when Jason Zucker attempted to tip in a pass and a rebound of that shot in rapid succession.

Lehtonen stopped both shots for the first of his 20 saves.

At 5:34 of the second period, the Stars took a 1-0 lead. Vernon Fiddler sent the puck out from behind the net as Roussel skated in front. Roussel's high shot beat Kuemper.

The Wild tied the game at 15:41 of the second after Ryan Carter took the puck away at Minnesota's blue line to start a 2-on-1 break. He passed across to Haula, who shot from the left circle into the right side of the net.

Roussel missed a chance for a second goal off the third-period faceoff when his shot went just left of the goal.

Instead, the Wild went down the ice and scored what proved to be the winning goal.

NOTES: Stu Bickel, a Minnesota native, made his first appearance for the Wild after being recalled from Iowa of the AHL. He averaged more than 2 penalty minutes per game for the New York Rangers in 2011-12 and '12-13, and went off for unsportsmanlike conduct at 2:53 of the first period Saturday. ... That was one of just three minor penalties in the game. Neither team scored on the power play. Minnesota has only eight goals in 49 power plays. ... Ales Hemsky's assist on Roussel's goal was only his second assist and second point this season.