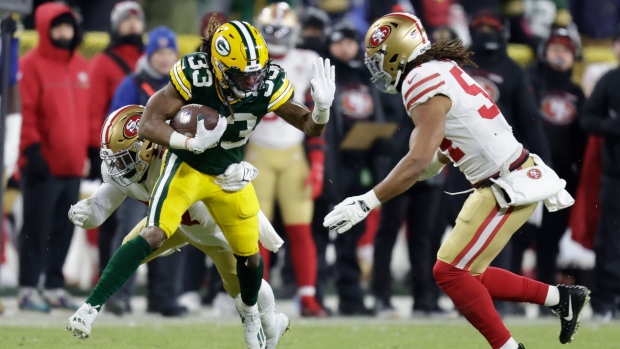 Aaron Rodgers and the Green Bay Packers hold a 7-0 lead over Jimmy Garoppolo and the San Francisco 49ers after the first half of their Divisional Round matchup.

Green Bay got out to a lead early thanks to Rodgers taking them on a 10-play 69-yard drive to open the game.

The drive ended with running back A.J. Dillon scoring the only touchdown of the half to give Green Bay the lead.

San Francisco went three-and-out on their opening four drives of the game, generating just nine yards of offence on those drives.

Garoppolo and the 49ers would find success late in the half, driving down and having a first-and-goal on the Packers nine-yard line.

However, on second down Garoppolo was intercepted and Green Bay would take over on their own two-yard line.

Rodgers connected with running back Aaron Jones for 75 yards to setup a Mason Crosby field goal, but the 49ers blocked the quick to remain down 7-0.