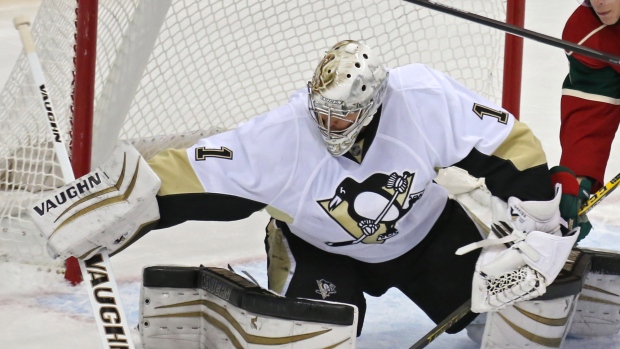 ST. PAUL, Minn. - Marc-Andre Fleury was given a well-earned rest from the Pittsburgh net.

Thomas Greiss didn't let him or the Penguins down.

Greiss made 33 saves while extending Pittsburgh's shutout streak to 205 minutes and 28 seconds, guiding the Penguins to a 4-1 victory Tuesday over Minnesota that handed the Wild their first defeat in six home games.

"I didn't feel too sharp," Greiss said. "Bunch of rebounds I wasn't too happy with, bunch of small things, but it's just nice to get the win."

Nick Spaling, Brandon Sutter and Chris Kunitz scored for the Penguins, whose run of unanswered goals also ended at 18 when Nino Niederreiter got one on a breakaway for the Wild with 9:18 left. Rob Scuderi had two assists for the Penguins, who won their fifth straight game. Their margin of victory is a whopping 22-5.

The Penguins have killed 30 straight penalties, four in this game. Their power play is ranked first in the league, too. Kunitz's tip-in off Evgeni Malkin's feed gave them a 3-0 lead in the second period, just 11 seconds after Marco Scandella was sent to the box for the Wild for delay of game.

The Wild were the last team in the NHL to lose at home this season, outscoring their previous five opponents 21-6 at home. They nearly pulled within one with 3:05 remaining when Mikko Koivu's rebound shot got past Greiss, but the goal was waved off. Because Mikael Granlund made incidental contact in the crease with Greiss before the puck cross the goal line, the NHL said, the call on the ice could not be reviewed or overturned.

"It's obviously very frustrating, definitely very big, because I thought it should have been a goal," Niederreiter said.

Patric Hornqvist added an empty-netter to seal it for the Penguins, who were outshot 34-22. The Wild have outshot every opponent this season. All but one team they've faced made the playoffs last season.

"I think we took for granted just being at home," Wild defenceman Ryan Suter said. "We've had a lot of success here. We just came out flat, and we thought that we just had to show up to get the win."

Fleury posted shutouts in three of the last four games, but as the Penguins started a five-game road trip Johnston gave Greiss his second start of the season. He was in the net for Pittsburgh's last loss, a 4-3 overtime decision at Detroit.

"It's tough to come in sometimes and play when you haven't in a while, and he did a great job," Spaling said. "There was times when momentum could've changed pretty easily, and he did a good job of keeping us in there."

Kunitz, Hornqvist, Malkin and Sidney Crosby have accounted for 60 per cent of Pittsburgh's goals, so the third-line production from Spaling and Sutter was more evidence of this team's prowess.

Defenceman Robert Bortuzzo made his season debut for the Penguins, recovered from a lower-body injury. He replaced Olli Maatta, who had surgery earlier in the day in Pittsburgh to remove a tumour from his thyroid gland.

Pathology testing will be done to determine whether it's malignant, but Penguins team physician Dr. Dharmesh Vyas said even if Maatta is found to have cancer he's not likely to need radiation or chemotherapy. Maatta, who made the team at age 19 last season and was second among defencemen with 29 points, is expected to be able to return to the lineup within a month.

NOTES: Malkin has at least one point in all 11 games this season. ... Spaling has six goals in 15 career games against the Wild. ... The Wild scratched Matt Cooke with a lower-body injury for the third straight game, this time against his former team. ... New Minnesota Twins manager Paul Molitor, whose boyhood neighbourhood in St. Paul was about 2 miles east of Xcel Energy Center, attended the game in Wild owner Craig Leipold's suite. ... In another suite, 14 guests from the Parliament of Finland took in the game. The Wild have four Finns on the roster: goalie Niklas Backstrom and centres Granlund, Koivu and Erik Haula.