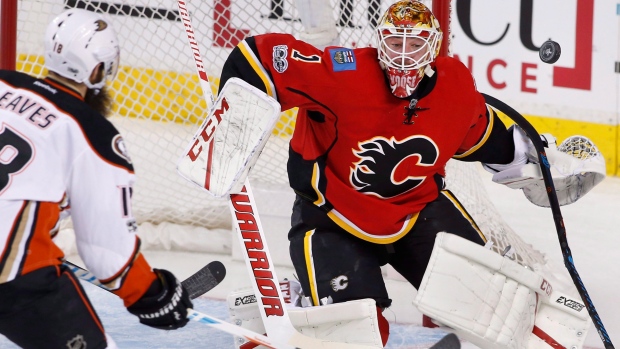 Calgary Flames head coach Glen Gulutzan would not commit to Brian Elliott as his starting goalie for Game 4 against the Anaheim Ducks,

The Flames are facing elimination, down 3-0 to the Ducks in their first round playoff series, and Elliott is coming off a tough Game 3, allowing five goals on 27 shots in the Flames' 5-4 overtime loss to the Ducks.

For the series, Elliott has a 3.67 goals against average and .887 save percentage.

Elliott traded the starting job Chad Johnson for more than half the season. In the end, he outstarted Johnson 49-36. The two posted identical .910 save percentage, while Elliott held the slight advantage in goals against average at 2.55 to Johnson's 2.59.

Gulutzan said he would make his decision on who will start in net later Tuesday night.