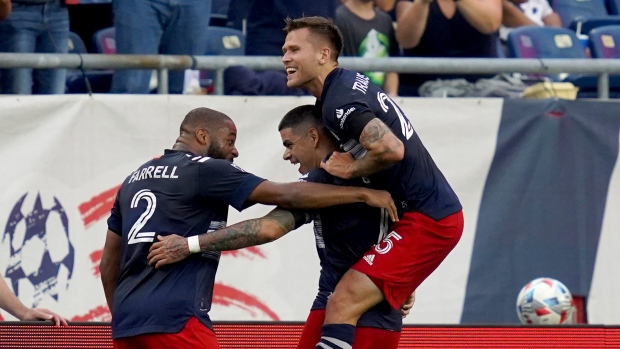 Bou, who scored two goals in New England's 3-1 win over Orlando City in the 2020 playoffs, ripped a right-footer from well outside the area that bounced off the crossbar — twice — and into the net to open the scoring in the 29th minute. The 31-year old scored again, his eighth goal in the last nine games, to make it 2-0 in the 73rd.

The Revolution (10-3-3), who won for the third time in eight days, lead all of MLS with 33 points this season — one more than Western Conference-leading Seattle, which played Sunday night at home against Sporting Kansas City.

“I believe we played a good game," CF Montreal manager Wilfried Nancy said. "We had a lot of chances, but we didn’t finish.

"We were in trouble for a moment, but we bounced back. We had a good game against the first placed team in the conference. We have to look at the positives and build on that for the next games. We didn’t give up. We felt that we were close to completing the comeback in this game.”

Djordje Mihailovic's first-timer off a feed Joaquín Torres got Montreal (6-5-4) on the board in the 79th minute. The 22-year-old Mihailovic, in his fifth MLS season and his first with Montreal, has a career-high tying three goals and four assists this season.

“Overall, as a team, this was one of our better games of the season," he said. "The way we were able to build from the back and create the chances we had was good.

"Personally, I’m upset about myself, but from a team point of view I’m proud. We did phenomenal creating the chances that we had, but we need to finish those off.”