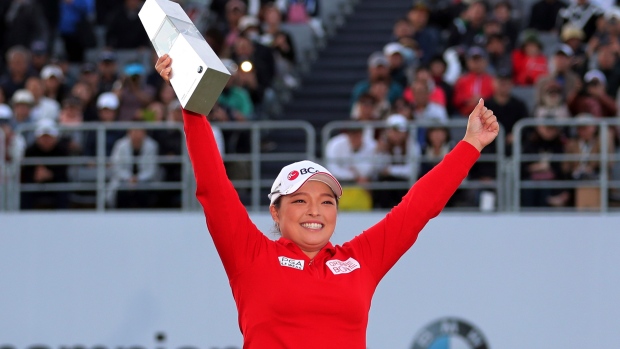 Both players parred the par-4 18th twice in the playoff before moving to the 10th hole at the LPGA Busan International course, where Jang's three clinched it after hitting her 95-yard approach to four feet.

Kang, who birdied eight of her first 13 holes for a 64, and Jang, 65, finished with 19-under 269 totals. Kang won last week's Shanghai tournament, the first of four LPGA events in Asia.

The Seoul-based Jang had an eagle and three birdies on the back nine, including on the par-4 17th that moved her into a tie for the lead.

On the first playoff hole, both players missed the 18th green, with Kang going over the green and Jang leaving her approach short. After two par saves, it was back to the 18th tee. Kang put her approach shot to 10 feet, but her birdie putt hit the hole and lipped out.

"I will not play that putt any different," said Kang. "That was such a good stroke. I thought it was in."

On the third playoff hole, after Kang's 20-foot birdie putt missed to the right, Jang tapped in the winning putt and immediately raised her arms to the sky in victory.

Jang is the second non-LPGA member winner of the 2019 season, joining Women's British Open champion Hinako Shibuno. With her win, Jang is eligible for immediate LPGA Tour membership, or she can defer it to the 2020 season.

She played on the LPGA Tour from January 2015 to May 2017 and said she wanted to spend more time with her family when she rescinded her membership and returned to the Korean tour.

"As for going back to the LPGA, there's a lot to discuss," said Jang, who has until Nov. 18 to accept 2020 membership. "My mother is not quite well yet. I think I would have an answer for you regarding returning to the LPGA later on. I can't say right now."

It was her fifth LPGA tournament victory, her last coming at the 2017 Women's Australian Open. She has 12 wins on the Korean tour.

Amy Yang had a 67 and was three strokes behind in third.

With her tie for ninth in Busan, No. 1-ranked Jin Young Ko clinched player of the year honours. So far in 2019, Ko has won four times, including major victories at the ANA Inspiration and the Evian Championship.

"The season is not over, and I tend to set my goals on a weekly basis, so I have not thought about my goals for the next season," said Ko, who is scheduled to play in all three remaining 2019 tournaments.

Charley Hull finished with a 69 and was at 8 under, 11 strokes behind. Nelly Korda shot 71 and finished 5 under while Brooke Henderson had a 74 and finished at 3 under. Paula Creamer's 74 left her at 2 over while Morgan Pressel was another stroke behind after a 76.

The LPGA Tour's Asian swing moves to Taiwan next week followed by a fourth stop in Japan.