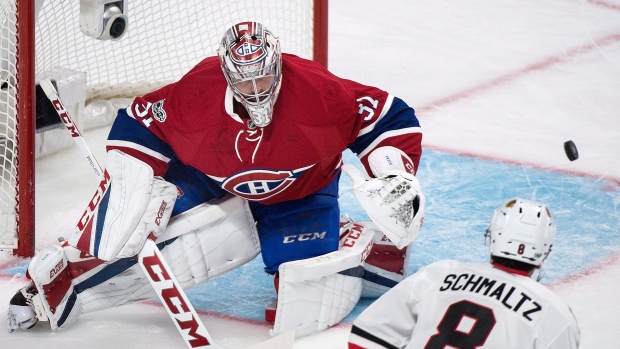 MONTREAL — The Canadiens may be Carey Price's team, but Montreal is Corey Crawford's city. The Chicago Blackhawks goaltender never lets anyone forget that when he comes home.

Crawford made 40 saves as the visiting Blackhawks defeated the Canadiens 4-2 to take the lead atop the Western Conference standings and spoil Price's 500th NHL game.

"Playing here in front of family and friends is always special," said Crawford, who has never lost to the Habs in regulation time (7-0-2). "I just enjoy it. It's always good."

Crawford withstood a flurry of shots at the very end of the first period to preserve Chicago's lead after Patrick Kane made it 1-0.

In the second, the 32-year-old took a mighty Shea Weber slapshot off his mask from just a few feet out. The Blackhawks goalie was stunned but stayed in the game.

"I didn't have any time to get out of the way," said Crawford, who was coming off a season-best 42-save effort against the Minnesota Wild on Sunday. "Hard shot. I tried to take the angle away. He smoked me there."

Crawford was eyeing a shutout but was beaten twice in the third period. Paul Byron slapped a bouncing puck over his shoulder at 12:42 before Weber scored on a slapshot from the point at 16:32.

"It got a little tight there at the end but big two points for us against a big team," said Crawford, who faced 18 shots in the third. "We were pretty good all game. We had a lot of chances.

"It's a great win, especially in this building."

Price, who made 20 saves, became the third Montreal goaltender to reach the 500-game milestone. Only Patrick Roy (551) and Jacques Plante (556) have played more games between the pipes for Montreal. But playing Chicago isn't easy for the Canadiens (39-23-8), who haven't beaten the Blackhawks since 2014 (0-6-1).

Crawford has never conceded more than two goals in a game against Montreal — his highest save percentage against any opponent.

"Getting that first goal is just taking us too long," said Byron, who now has 19 goals on the year. "We can't wait until the end of the third period to get going. We're all trying hard and doing the right thing. We just have to focus on getting one earlier."

After Kane's opener in the first, Chicago (44-20-5) got goals from Johnny Oduya, Artemi Panarin and Jonathan Toews, into the empty net.

Montreal's Alexei Emelin was at fault on the Blackhawks' first three goals.

Kane, who also had two assists on the night, scored in the first after Emelin couldn't control the puck at centre ice. In the second, the Canadiens defenceman collided with his own teammate just moments before Oduya made it 2-0.

Emelin was again to blame for Chicago's third goal when he inexplicably changed sides mid-rush, leaving Panarin all alone in front of goal. With time on his side, Panarin roofed the puck on Carey Price 47 seconds into the third period. Emelin finished the game with a minus-3 rating.

"The mistakes that we made, they capitalized on," said Jeff Petry, who was on a defensive pairing with Emelin. "We have to communicate, to know who's going for the puck and who's picking the net-front guy. The communication wasn't there tonight.

"I'm definitely not happy with the outcome of the game."

Both the Canadiens and Hawks came into Tuesday's encounter with 8-2-0 records in their last 10 games.

Chicago's Artem Anisimov left the game in the first period with a left leg injury after Alexander Radulov fell on him. He did not return.

Notes: Defenceman Brandon Davidson, acquired at the trade deadline, got his second start with Montreal, replacing Nathan Beaulieu on the blue-line. … The Clarkson Cup-winning Canadiennes de Montreal (CWHL) were honoured in a pre-game ceremony.