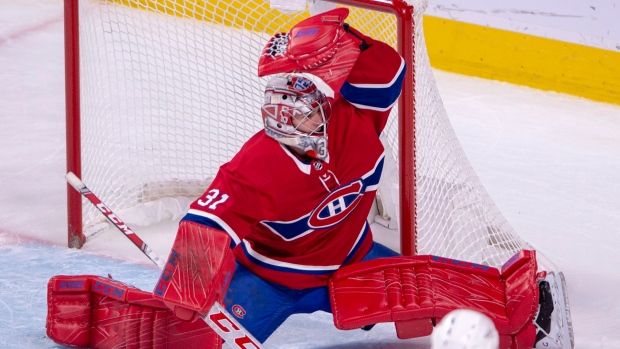 MONTREAL — The Montreal Canadiens will be without goaltender Carey Price for their upcoming three-game road trip.

The Canadiens announced Thursday that Price will not travel with the team to Florida because of a lower-body injury. Price has been placed on the IR retroactive to Dec. 22.

The Canadiens play the Panthers on Friday night in Sunrise, Fla., then face the NHL-leading Tampa Bay Lightning on Saturday.

The Canadiens will likely look to Antti Niemi to carry the load in goal over the road trip. Niemi has a 4-3-1 record with a 4.14 GAA and .876 save percentage backing up Price this season. Goaltender Michael McNiven was recalled from the AHL's Laval Rocket.

Charlie Lindgren, the Rocket’s usual starter, is currently on the injured reserve with a lower-body injury and hasn’t played since early December.

McNiven signed an entry-level contract with the Habs as a free agent after his second season in the OHL with the Owen Sound Attack.

The game in Florida also has another intriguing storyline.

It marks Canadiens forward Max Domi's first game against the Panthers since he was suspended for the remainder of the pre-season schedule for punching Florida defenceman Aaron Ekblad in an exhibition game. Panthers goalie Roberto Luongo called the sucker punch "gutless" and said the team "won't forget about it" in the immediate aftermath.

Domi, however, wasn't interested in revisiting the topic when talking to reporters Thursday.

"To be honest, all we're really focused on is the game," he said. "Nowadays every game is a playoff game. That's all we're focused on. It's a hockey game and we've got to find a way to get (two) points and start the road trip the right way."

Veteran defenceman Karl Alzner, meanwhile, could make his return to the Montreal lineup after being recalled from AHL Belleville on Wednesday. The move was made after defenceman David Schlemko was placed on injured reserve.

"I was a little bit surprised when I got the call, but obviously extremely happy," Alzner said. "It's a nice Christmas present."