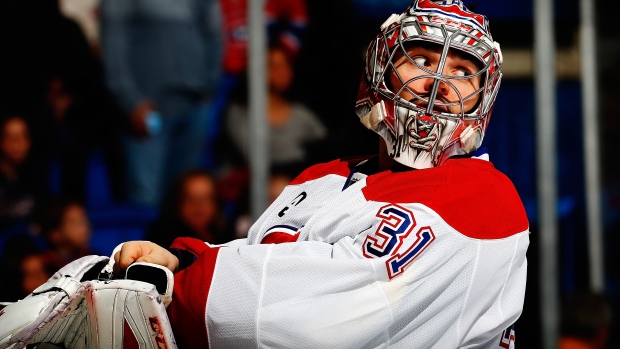 BROSSARD, Quebec - When the Montreal Canadiens pass the torch for their 99th home opener on Tuesday night against the defending Stanley Cup champion Pittsburgh Penguins, their all-world goaltender will not be there to receive it.

Carey Price returned to the ice for the first time in eight days on Monday morning after recovering from a severe case of the flu, but left after 30 minutes of individual work with goaltending coach Stephane Waite.

Al Montoya confirmed he will start on Tuesday night at Bell Centre. The Habs picked up three of a possible four points with Montoya starting the first two games of the regular season with a .942 save percentage.

After wrapping up practice at Complexe Sportif Bell, Canadiens coach Michel Therrien said he did not know for sure whether Price would skate on Tuesday, but ruled him out as a backup to Montoya. Charlie Lindgren has been filling that role.

This will be Montreal’s first home opener without Price in the lineup since 2006.

“This was a first step,” Therrien said of practice. “He had a little workout [on Sunday]. His first step was to step on the ice. As you know if you’ve had one of these [illnesses], it’s not just a 24-hour thing. You don’t feel great.”

Therrien said Price has lost weight and is not yet back to “100 per cent.” He did not take shots from teammates on Monday, instead exiting the practice rink as they skated on.

Price’s brief workout on Monday did little to quell the conspiracy theories running rampant across Montreal, wondering whether he re-injured his knee or perhaps sustained a concussion. The Canadiens’ faithful are just hungry: It has been 327 days since Price last played in a meaningful game in the bleu, blanc et rouge.

“As soon as we heard he was sick, we knew some story was going to be made about it,” defenceman Nathan Beaulieu said.

Therrien could do little more than shake his head when asked about the “conspiracies.”

Naturally, Canadiens fans quickly think back to last season, when little information was available about Price’s knee injury that kept him sidelined from November through the end of the regular season.

Little information trickled out about Price’s absence over the last eight days, aside from the fact he had a fever, was taking antibiotics and under the care of a team physician. There was no timetable for his return.

But Canadiens players say they can already notice a difference in Price just looking at him. It won’t be long now.

“He's got more colour in his face,” Beaulieu said. “He’s coming back to life, so he [was] pretty sick, so it's nice to see him back around the rink. It’s just funny the situation that happened but looks like he's gonna be good to go here shortly.”