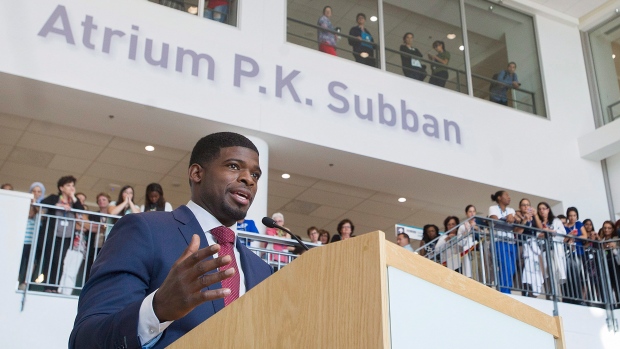 BROSSARD, Que. — The Montreal Canadiens traded P.K. Subban to the Nashville Predators for Shea Weber on Wednesday in a blockbuster swap of star defencemen.

Many fans and media in Montreal reacted with shock or even outrage when the Canadiens announced that the popular Subban was leaving the team after seven seasons. The deal came two days before a no-trade clause was to go into effect on a long-term contract averaging US$9 million per season.

"Right now I'm going to a team that wants me," Subban told Nashville media on a conference call from Paris, adding he felt "a whole lot closer" to winning a Stanley Cup after the trade.

Canadiens general manager Marc Bergevin said in a release that the deal would "make the Canadiens a better team.

"It is also one of the most difficult decisions I've had to make as a general manager of the Montreal Canadiens. In Shea Weber, we get a top-rated NHL defenceman with tremendous leadership and a player who will improve our defensive group as well as our power play for many years to come. He is a complete rearguard."

Bergevin praised Subban's skill and commitment to the Montreal community before wishing him good luck in Nashville.

Subban's flashy, risk-taking style appeared at times to be at odds with coach Michel Therrien's more conservative approach and questions were raised about his popularity with his teammates this season. He was passed over in voting for a nominee for a community service award despite his much-publicized pledge last fall of $10 million to the Montreal Children's Hospital, where the entrance was renamed the P.K. Subban Atrium.

"Listen, while I was a Montreal Canadien, there's nothing but fantastic times for me," Subban said. "I have to say that out of all the fanbases in the National Hockey League, the Montreal Canadiens' fans and community and the province of Quebec has probably embraced me more than any other player has felt in any other city.

"It's give and take. I've done a lot of things in that community and they've supported me since the day that I was drafted. So I've always felt wanted by the fans and the community there.

"On the business side of things, the Montreal Canadiens paid me a lot of money two years ago to do what I do for a living. At the end of the day I just wanted to come in and do my job. But obviously right now I'm going to a team that wants me and the Montreal Canadiens felt that they had to take it down a different path."

Bergevin said last week that, while he was not "shopping" Subban, he was listening to offers for the 2013 Norris Trophy winner as the NHL's top defenceman.

He got the bigger, more defensively dependable player he was likely seeking in Weber, one of the NHL's premier rearguards who at nearly 31, is more than three years older than the 27-year-old Subban. Both are right-hand shooters.

The six-foot-four native of Sicamous, B.C., brings a booming shot that helped him lead the NHL with 14 power play goals last season. He is been a constant on Canadian teams at major events, winning Olympic gold in 2010 and 2014. Subban was a little-used member of the 2014 Olympic squad and was not selected for this year's World Cup of Hockey.

Like Subban, he rarely misses games to injury, having sat out only 19 games in the last eight campaigns. Weber has 166 goals and 443 points in 763 career games. He scored 20 goals and 31 assists in 78 games last season for the Predators.

Subban, a Toronto native, recorded six goals and 45 assists in 68 games last season for the Canadiens. The Toronto native has 63 goals and 278 points in 434 career games.

"P.K. Subban is an elite offensive defenceman with tremendous skill and contagious energy that makes the Nashville Predators a better team now and into the future," said Nashville GM David Poile. "Superstar defencemen of his calibre are a rare commodity, and we are thrilled to add him to the organization."