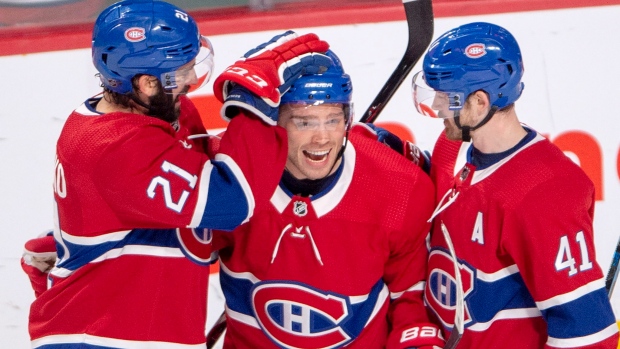 It paid off with three-point nights for both players as the Montreal Canadiens defeated the Ottawa Senators 5-2.

Domi scored twice and added an assist for his second three-point outing of the season and Drouin had a goal and two helpers to pick up three points for the first time this year.

"Me and Max were in the same boat the past couple years where we don't shoot enough," Drouin said. "Sometimes you just got to shoot and keep it simple."

Domi scored two of the Canadiens' three second-period goals — all within a span of three minutes and 39 seconds — with Drouin assisting on both.

"I know how (Drouin) is going to pass the puck," Domi said. "You read the spin on it. He knows where the sweet spot is. Good players like (Drouin) can find that and I all had to really do was smack the puck."

The three-goal burst gave the Canadiens the lead for good after being tied 1-1 partway through the period.

The Senators felt the game unravelled for them in that stretch.

"The game was right there for us," said Senators forward Mark Stone, who scored one of Ottawa's two goals. "We just didn't play smart in the last five minutes of that second period."

Artturi Lehkonen and Brendan Gallagher also scored for the Canadiens (13-10-5), who entered the game with one win in their last seven. Carey Price stopped 28 shots.

Dylan DeMelo had the other goal for the Senators (12-13-3), who had a three-game win streak snapped, and Craig Anderson made 36 saves.

The Senators' road record fell to 3-9-1, with just one road win in their last five games. Anderson had no answers when asked why the Senators haven't had more success away from home.

"Not sure," Anderson said. "You got me stumped. I don't know, other than line matchups, there's really not a whole lot different between home and the road."

Drouin scored with 5:30 left in the opening period as he and Domi used their speed on a two-on-one against Senators defenceman Cody Ceci. Domi sped up the wing before feeding the puck to Drouin, who backhanded it through Anderson's legs.

DeMelo tied the game in the second period, wiring a one-time pass from forward Mikkel Boedker from the blue line that Price couldn't get to.

But the Canadiens replied with their three unanswered goals in the second period.

Stone made it 5-2 with his 13th of the year midway through the third period.

The Canadiens and Senators play a rematch Thursday night in Ottawa. The two sides meet again Dec. 15 at Bell Centre.

NOTES: Gallagher was named the 2017-18 recipient of the Jean Beliveau Trophy for community involvement before puck drop. ...The Canadiens wore jerseys with nicknames on the back during warm-up. The jerseys will be autographed and auctioned off, with proceeds going towards the Canadiens Children's Foundation. ... Brady Tkachuk has been held without a point in three games, his longest drought of the season.