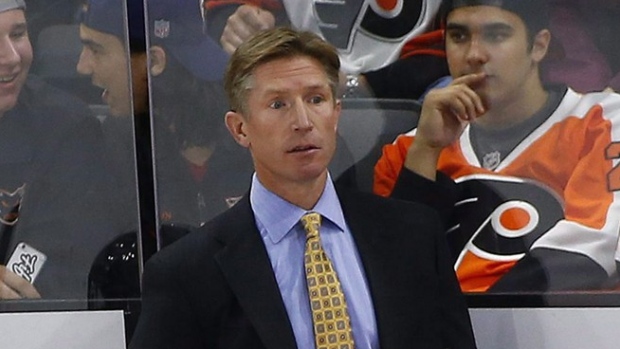 PHILADELPHIA — Coaching in the NHL is a cold business. There’s no hiding from it. Years of close friendship and Stanley Cup memories routinely unravel on the result of an ill-fated road trip.

But even the ugliest of coaching divorces are at least usually a clean split.

Rarely does a team allow a coach to dangle out there like the Philadelphia Flyers did with Dave Hakstol, who was mercifully fired on Monday after parts of four seasons at the helm.

That a coaching change became necessary was no shock. The Flyers rolled over and quit on Hakstol on their swing through Western Canada.

It was the execution that was botched.

Hours after a report surfaced on Sunday that Hakstol was fired, the Flyers denied the story and said definitively: “Dave Hakstol is our coach.” A spokesman said practice would resume on Monday and even after the team took the ice without Hakstol, there was no official word.

A mess was made of Hakstol for the hockey world to see, an embarrassing fumble played out in real time on social media for one of the game’s proudest franchises.

The Flyers have sliced and diced plenty over their 51 years - from Roger Neilson and then-GM Bob Clarke saying “we didn’t tell him to go get cancer” to firing Peter Laviolette three games into a season - but someone must have forgotten to sharpen the guillotine in South Philadelphia.

“I just felt there was a disconnect,” Flyers GM Chuck Fletcher said of Hakstol and his team. “When the communication breaks down, I guess ... when the message wasn’t received you get to a point where this is what happens. You make a change and you try to get a different voice ... I felt it was in everybody’s best interest, including Dave, to make this decision sooner rather than later once it came to this point.”

Hakstol was fired amid one of the bloodiest stretches for coaches in NHL history.

Five coaches have been canned over the last 44 days since Los Angeles axed John Stevens on Nov. 4, including Joel Quenneville in Chicago on Nov. 6, Mike Yeo in St. Louis on Nov. 19, Todd McLellan in Edmonton on Nov. 20 and Hakstol.

Only one season in the history of the game has seen more in-season coaching changes than this one - in 2011-12 when seven bench bosses were fired.

We still have a week to go until Christmas. Perhaps the spirit of the NHL's unique holiday roster freeze can be extended behind the bench.

Because the volatility has been incredible, even for NHL standards. Case in point: Hakstol had not made it three and a half seasons with the Flyers, where he was already the third-longest tenured coach in franchise history, and only three men in the NHL had been at their post longer: Tampa Bay’s Jon Cooper, Winnipeg’s Paul Maurice and Nashville’s Laviolette.

More than one-third of the NHL (11 teams) has turned over coaching staffs since the buzzer sounded on the end of last regular season in April. That was bound to happen after last season was the first in the expansion era to not have a single in-season coaching change.

And more change is on the way.

Three clubs, now including the Flyers, have coaches operating on an interim basis. The Kings and Blues have promised nothing to Willie Desjardins and Craig Berube.

Fletcher promoted AHL Lehigh Valley Phantoms coach Scott Gordon for what essentially amounts to a 51-game tryout for the job. Gordon, 55, coached the New York Islanders for parts of three seasons from 2008-11.

“My expectation is that Scott will be the head coach for the rest of the year,” Fletcher told reporters. “I’m going to begin a process to identify what I think the qualities of the next head coach of the Philadelphia Flyers needs ... In all honesty, I’m not sure how long that will take. Until I know what I’m looking for, I can’t find it.”

For Hakstol, who became the first coach in 25 years since “Badger” Bob Johnson to jump from the NCAA to the NHL when he was hired by former GM Ron Hextall in 2015, it was a failed experiment. Hextall was fired by the Flyers two weeks ago on Dec. 3.

Hakstol did not win a round in two Stanley Cup playoff appearances. He compiled a 134-101-42 record for a .560 points percentage, a perfectly middling record in today’s game.

He was also never evaluated with the benefit of proper goaltending. The Flyers had a team save percentage of .897 over the last three seasons, better than only Carolina (.8966) league-wide in that span. That the Flyers qualified for the playoffs in one of those seasons is impressive.

Unquestionably, part of the reason Hakstol was fired was the stalled development of some of the team’s young stars. Defenceman Ivan Provorov, 21, has experienced growing pains after a 17-goal campaign. No. 2 overall pick Nolan Patrick, 20, has taken a step back after closing last season on a tear. Shayne Gostisbehere, 25, has been a shell of his former self this season.

It will be on Gordon to shepherd along top goaltending prospect and Team Canada World Junior star Carter Hart, who was recalled from the AHL on Monday. Hart will be the Flyers’ sixth goaltender to see time this season, the second team ever to do that before Christmas.

Fletcher said the Flyers’ goal is “still to make the playoffs.” So, who’s next?

Fletcher denied a report that said Joel Quenneville accepted the job to be the club’s next coach, saying he hasn’t "spoken with Joel for probably over two years.”

“No, he’s under contract with Chicago, I haven’t asked for permission,” Fletcher said.

Yes, the search is on - for the next man up to be fired. We all have an expiration date, but hopefully nothing like coaches in the NHL.